Merchants Quay: ‘When they’re asleep we leave their gift at the end of their mat’ 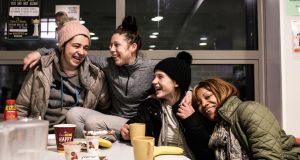 Ms O’Brien, from Inchicore, has been with the organisation for about 10 years, and currently is a project worker with the charity’s night cafe.

The night cafe is an emergency shelter which offers mats, blankets, hot food and showers for homeless adults and runs between 11pm and 7am, 365 days a year at its Dublin 8 headquarters.

“It’s actually lovely here at Christmas,” says Ms O’Brien. “The clients are like kids because when they’re asleep we leave their gift at the end of their mat.

“I was here last Christmas morning and there were girls waking up crying with their little bit of make-up or a new handbag.”

It is just after 10pm on a bitterly cold December night and Ms O’Brien and eight other project workers are preparing the shelter, which caters for up to 55 people per night.

At 11pm they open their doors and in streams a number of homeless men and women, of varying ages and backgrounds.

The night cafe is allocated through Dublin Regional Homeless Executive’s freephone each day. Last year, the shelter catered for more than 2,100 people, its highest figure since it was established in 2015.

Among those through its doors on this particular night is Tony McLoughlin (48), who has struggled with drug addiction in the past and has been homeless for four years.

“I stay with my mam during the day and make her dinner, do the things she can’t really do anymore,” he says. “I stay on her couch the odd night but I can’t be under her feet all the time either . . . I’d be lost without them here, you don’t have to ask them for anything twice.

“They give you whatever they can. They feed you. If God forbid you needed clothes they’d see if there’s anything in the store room, things like that. There should be more of them.”

Ronan Haverty, aged in his 30s, has been attending the night cafe with his partner on and off for the last year. Originally from Co Galway, Mr Haverty says he fell into homelessness through drug addiction.

“The staff are very helpful, helping with dole forms, getting medical attention, that kind of thing,” he says.

“We get some grub, kill a few hours and then head off again. It’s just about breaking up the hours. In the morning then you’re killing time, walking around the place. It’s hard.”

Stefana Tomescu, a project worker at the night cafe since March, will be working both Christmas and St Stephen’s Day nights.

“It will be nice to experience it in a sense . . . it’ll be good for myself personally,” she says. “I think we get caught up in the little details and forget how lucky we are sometimes, having a home to go to at the end of the day. I think a lot of people don’t realise it could happen to anyone.”

It is coming up to midnight at the cafe. Many have turned in for the night, a handful remain on the main floor eating a hot meal or watching television while some make use of the shower facilities.

Ms O’Brien is monitoring the toilets and shower area with a male member of staff, providing toiletries, fresh underwear and clothes for those who need it.

“I could go home some days and it would take me hours to go to sleep because you’re thinking. You’re trained to leave it at the door but some days you just can’t . . . you know, if someone died and you’re going back thinking how long you knew them,” she says.

“It does play on your mind but then you just have to brush yourself down and come back in the next day and do it all over again.”