Family of eight to endure a fourth homeless Christmas 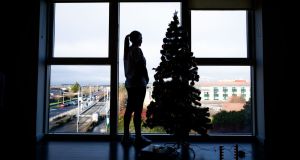 Colleen McDonagh at her apartment in Tallaght. Photograph: Tom Honan

Colleen and John McDonagh and their six children are preparing for their fourth Christmas in emergency accommodation.

From Tallaght, Dublin they became homeless in September 2016 when their landlord sold the house they had rented for five years.

They spent several months moving from hotel to hotel before being accommodated in two rooms in a hotel in Co Kildare.

John works as a courier while the children go to school in Clondalkin. In August 2017 they were placed in “own-door” emergency accommodation in Tallaght. The second-floor, three-bedroom apartment is one of 65 in the complex accommodating homeless families. Colleen and John pay €175 a fortnight in rent.

It feels like we are trapped here. We are bursting at the seams. We’re all on top of each other

“We were told we’d be here for a maximum of 18 months,” says Colleen. “At first we were delighted, after the hotels.”

Now, she says, “it feels like we are trapped here. We are bursting at the seams. We’re all on top of each other. The older kids have no privacy. There is no space to put anything.”

It should be noted the McDonaghs, though homeless, do not appear in these figures. Homeless families – including more than 1,600 people – in “own door” accommodation were removed from the homelessness statistics last year by the Department of Housing in a recategorisation exercise.

On their landing, says Colleen, each apartment has had three families come and go since they arrived.

“They were all smaller families. Our problem is we need a four-bed place, and they just aren’t out there. We’ve looked and looked and any that comes up, we don’t get.”

South Dublin County Council – whose housing list they have been on for almost 12 years – will not let them move into a smaller home for “health and safety reasons”.

Michael, he’s nearly 15. Will he look back on his childhood and think: ‘I never really had a home’?

“When we first became homeless I would have taken a three-bed but after living like this I know it wouldn’t work out. Michael needs a room. John and me need a room. If we got a three-bed the third would be a box room. I’d be putting Michael in there and the other five in a room. No, it wouldn’t work.”

As other families arrive, and then leave, the children have made friends only to see them leave for homes. “That gets to them. They are asking: ‘How come they got a house and we were here before them?’ They’re asking what’s wrong with us.”

They cannot put up pictures or shelves or redecorate in any way. They cannot have pets.

“Michael, he’s nearly 15. Will he look back on his childhood and think: ‘I never really had a home’? Chloe, she’ll never bring anyone back here. She’s embarrassed. I worry about the effects on them all.”

She says they apply for every four-bedroom home that becomes available on the council’s choice-based lettings (CBL) site – whereby housing applicants can express an interest in an available dwelling – but without success. Housing is allocated on CBLs to the interested applicant highest on the list.

They have also viewed houses on the private rental sector. “The minute a landlord hears you’ve six kids it’s like, no way. I do understand that.”

“They just aren’t building enough four-beds.” She says the council should buy larger houses to let to larger families like hers effectively stuck in homelessness.

“Families with a four-bedroom need are spending significantly longer lengths of time in emergency accommodation,” he says.

“In such cases there is an urgent need for the council to specifically purchase homes to meet these families’ needs.”

Neither SDCC nor the Dublin Region Homeless Executive would comment on the McDonagh’s specific case. Both SDCC and Dublin City Council say they have a programme of acquiring four-bedroom homes for larger families. Since October 2019 the latter has appointed housing support officers specifically to work with families who have been “long term” in homelessness.

Colleen sometimes feels her family has been forgotten about, especially since being removed from homelessness statistics. “Of course we’re homeless, even if we’re not counted. Kids like mine are forgotten about by Eoghan Murphy. ”

“This apartment is better than a hotel, but it’ll never be our home. I’ve come to absolutely hate the place. I hate the walls. I hate the stairs. I hate how it feels. It feels like we’re in a prison camp of homelessness.”