Homeless numbers fell last month but are still up on 2018

Latest data from Department of Housing show over 3,700 children without a home 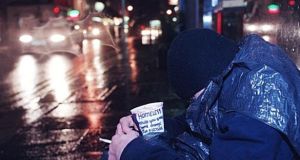 The brunt of the homelessness crisis is concentrated in Dublin, where 4,509 adults and 2,782 children were homeless.

The number of homeless people in the State fell slightly in November, according to data released by the Department of Housing.

The total fell by 66 between October and the end of November to 10,448 people.

The figures, published on Friday, show there were 3,752 homeless children and 6,696 homeless adults living in emergency accommodation at the end of November, an increase of 480 when compared to the same month in 2018.

Previous years have been marked by a similar seasonal fall in the homeless figures during the winter months, followed by sharp increases from February onwards. The statistics record the number of people living in emergency accommodation such as hotels or bed and breakfasts.

The majority of the homelessness crisis is concentrated in Dublin, where 4,509 adults and 2,782 children were homeless. The number of people aged 65 and over without a home increased to 165.

The figures reveal 882 young adults aged between 18 and 24 were homeless and 948 of the families recorded as homeless were single-parent families.

Simon Communities spokesman Wayne Stanley said one positive from the latest figures was a small fall in the number of homeless families.

However, he said the overall figures did not include several categories of people without their own homes.

“These numbers do not include rough sleepers and those in squats, people in direct provision and women’s shelters, and the ‘hidden homeless’ who have no home of their own,” he said.

He said a shortage of one- and two-bedroom houses was driving a significant increase in the number of single homeless adults.

Mr Flynn said Minister for Housing Eoghan Murphy’s “over reliance on the private sector” to solve the housing crisis was not working.