Hundreds of elderly people could end up in homeless hubs within 5 years, says charity

Friends of the Elderly have hosted a Christmas party at their Bolton Street headquarters in Dublin for 70 older people who live nearby. Video: Bryan O’Brien 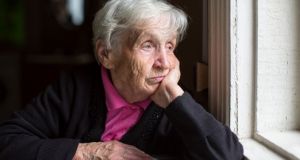 More than 250 older people are currently on the Alone housing waiting list while increasing numbers of people in their 70s and 80s have nowhere to go after receiving notices to quit their rented accommodation, chief executive of the charity Seán Moynihan said on Sunday. File image: iStock

Hundreds of older people could end up in homeless hubs within five years if measures are not taken to regulate rent increases and protect the housing rights of our ageing population, the national charity for older people in Ireland has warned.

The Alone organisation is calling for more action to support the hundreds of people aged 70 or more who will be forced to spend Christmas in emergency accommodation or worrying about eviction notices on their homes.

More than 250 older people are currently on the Alone housing waiting list while increasing numbers of people in their 70s and 80s have nowhere to go after receiving notices to quit their rented accommodation, chief executive of the charity Seán Moynihan said on Sunday.

“Some of the older people we work with will be spending Christmas and new year in B&Bs and insecure forms of accommodation,” he said, adding that many more were opting to sleep on friends’ couches or in inappropriate conditions because they are afraid to use hostels or other emergency options.

“We’re an aging population. With the rising cost of rent the danger is in five years time we will end up with homeless hubs for older people.”

In 2019 the charity dealt with 1,700 cases where they provided support to older people facing eviction or living in poor conditions. Mr Moynihan underlined that while Alone is not a housing agency the organisation’s 2,000 volunteers are increasingly spending time providing support to those facing housing issues.

“Receiving a notice to quit when you are younger is extremely difficult, but this challenge is compounded when we reach our 70s and 80s, and especially so during the winter months,” said Mr Moynihan. “In the 60s and 70s older people lived in the poorest conditions because when they retired they didn’t have the ability to mind themselves,” he said. “We really don’t want to go back there.”