‘Migrants are entitled to have somewhere to start off their new life,’ says Ivor Davies 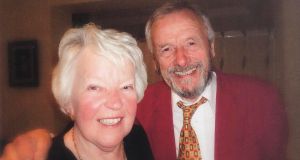 Ivor and Mary Davies who celebrated their 60th wedding anniversary on Saturday in the local Hotel Rosslare as a gesture of support for the hotel and its asylum seeker residents.

A couple in their 80s say they chose to celebrate their 60th wedding anniversary in their local Co Wexford hotel, currently being used as emergency accommodation for asylum seekers, in solidarity with migrants who come to Ireland seeking a better life.

The Davies said they also wanted to mark their diamond anniversary in the Hotel Rosslare as a gesture of support for the hotel which they say is a vital part of their local community.

Ivor Davies, originally from the United Kingdom but who has lived in Ireland for more than 50 years, had become frustrated by the “begrudgery” towards both asylum seekers and the hotel owners who choose to accommodate them while they await on a decision on their application for international protection.

Having watched three hotels close in the town during his two decades living in the area, he wanted to do something so the Hotel Rosslare, which remains open to public guests as well as providing emergency accommodation to a small number of asylum seekers, could be “supported and kept alive”.

“The hotel is part of the way of life of Rosslare Harbour and we want it kept as a hotel,” Mr Davies told The Irish Times ahead of the dinner he had arranged for 34 friends and family on Saturday night. “We don’t want a barbed wire fence around it.”

Mr Davies said he was tired of hearing rumours that asylum seekers will take over the town if the hotel continues to offer them accommodation. Growing up in the UK in the 1930s and 40s, he was taught to distrust foreigners and recalls the cardboard notices outside buildings which stated that “no Irish, no blacks, no dogs” were allowed inside. Later, he watched xenophobia develop towards the Indian and Pakistani families who arrived in the country.

“I was so indoctrinated to hate black and brown people because everywhere you went you were given a negative attitude towards people arriving in the UK.” However, after spending time in the military and moving to Ireland, Mr Davies’s opinion changed.

“I’ve completely reversed from how I felt growing up,” said the 87-year-old. “I don’t care who you are and where you’re from. I accept now that we all deserve to have a life. I have a different viewpoint all together now on migrants. I’m a migrant, I came here from Wales and England. ”

Almost 20 years ago, Mr Davies witnessed members of the local Rosslare community protest against Government plans to open a direct provision centre in the town. He thinks opinions have changed since then and that people are more tolerant and open. However, he was angered by the recent protests in Oughterard against the opening of a new accommodation centre in the west of Ireland town.

“Migrants are entitled to have somewhere to start off their new life and we have no right whatsoever to stand in their way. I do think the majority of people in Ireland are in favour of migration. It’s in Sweden, Norway, Britain, Spain and France; they all live with migration. Now it’s our turn.”