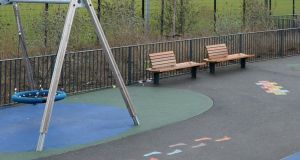 Concerns have been raised unsuitable individuals could seek access to children through applying for certain jobs and avoid vetting. Photograph: Dara Mac Dónaill

Organisations under the aegis of the Department of Culture are taking legal advice over a row with the Garda National Vetting Bureau, it has emerged.

In August it emerged that new workers in State-run parks and museums may not be vetted after the Department of Culture claimed An Garda Síochána had “clamped down” on processing applications for background checks.

The department co-ordinates vetting for people employed by bodies including the National Library of Ireland, the National Concert Hall and the National Parks and Wildlife Service.

In fresh correspondence released under Freedom of Information legislation, the Department of Culture has written to the bureau and informed them it has received “several calls and had several meetings with these organisations in recent weeks where they outlined their dissatisfaction with the current situation”.

Many of the bodies under the department’s aegis are now seeking legal advice, the correspondence reveals, as they believe the bureau’s interpretation of vetting laws are “at direct odds with their own child-protection policies”.

And in a letter to the Department of Culture, the bureau said it was “gravely concerned” that previous details of exchanges between the two bodies were reported in The Irish Times.

Superintendent Niall Featherstone said it appeared that correspondence had been “leaked to the media” and that he was “extremely surprised and gravely concerned”.

“I have conducted inquiries at my bureau and have established that no leak of this correspondence occurred within the GNVB,” he said, asking for the department’s view on the matter.

Almost every recent application made by the Department of Culture to the Garda National Vetting Bureau has not been processed, it emerged in August.

The bureau has said that certain employees do not need to be vetted because the presence of children is “incidental” to the job itself.

Concerns have privately been raised that unsuitable individuals could seek access to children through applying for such jobs and avoid the vetting because of the contention that the presence of children is “incidental”.

Minister for Justice Charlie Flanagan said any person who worked on a daily basis in the presence of children should be Garda-vetted.

“I believe anybody who works on a daily basis in the presence of children and young people should be vetted, but I haven’t discussed this issue with Minister Madigan,” he said.

Garda vetting is undertaken to ascertain that people carrying out work or activities which see them having contact with children or vulnerable persons do not have anything in their background that might make them unsuitable for the role.

The Department of Culture said it had applied the “same logic” in seeking vetting for such roles since 2012. The department said it would appear that the bureau had “clamped down on the rationale being applied for all applications” pointing towards the “exponential growth in the number of applications being processed” since the advent of online applications for vetting.