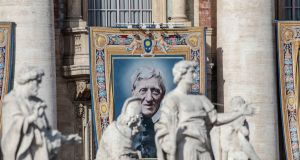 Also canonised at the ceremony were four women; Sr Mariam Thresia of India, who founded the Sisters of the Holy Family; Italian Sr Giuseppina Vannini, founder of the Daughters of St Camillus; Brazilian Sr Dulce Lopes Pontes of the Congregation of the Missionary Sisters of the Immaculate Conception of the Mother of God; and Marguerite Bays from Switzerland, of the Third Order of St Francis.

Born in London in 1801 Newman converted to Catholicism from Anglicanism and in 1851 was invited to Dublin to set up Catholic University of Ireland, becoming its first rector in 1854. He returned to England in 1858 was made a cardinal in 1879 and died aged 89 in 1890.

Described by Prince Charles, who attended today’s ceremony, as “this great Briton, this great churchman and, as we can now say, this great saint”, Newman bridged “the divisions between traditions.” It was “surely right that we give thanks for the friendship which, despite the parting, has not merely endured, but has strengthened,” the prince continued in what is believed to be the first article by a member of Britain’s royal family in Sunday’s edition of the Vatican newspaper L’Osservatore Romo.

As an educator Newman’s “work was profoundly influential in Oxford, Dublin and beyond, while his treatise, The Idea of a University, remains a defining text to this day,” the Prince said. “As an Anglican, he guided that church back to its Catholic roots, and as a Catholic he was ready to learn from the Anglican tradition, such as in his promoting the role of the laity. He gave the Catholic Church renewed confidence as it re-established itself in a land in which it had once been uprooted,” he said.

“Whatever our own beliefs, and no matter what our own tradition may be, we can only be grateful to Newman for the gifts, rooted in his Catholic faith, which he shared with wider society: his intense and moving spiritual autobiography, Apologia Pro Vita Sua, and his deeply-felt poetry in ‘The Dream of Gerontius’ which, set to music by Sir Edward Elgar – another Catholic of whom all Britons can be proud – gave the musical world one of its most enduring choral masterpieces,” he said.

Prince Charles represented his mother Queen Elizabeth II, titular head of the Church of England, at the canonisation.

Accompanying Prince Charles in the UK delegation were President of the Catholic Bishops’ Conference of England and Wales Cardinal Vincent Nicols along with 17 of its bishops. Also there were six Church of England Bishops; 13 MPs from Westminster’s all-party parliamentary group on the Holy See; representatives of the two Oxford Colleges Newman attended, Oriel and Trinity; UK Ambassador to the Holy See Sally Jane Axworthy and lord mayor of Birmingham Cllr Mohammed Azim .

Newman established the first English oratory near that city.