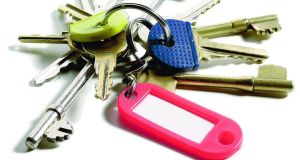 Over the last five years, 62,739 HAP tenancies have been “created”, but almost a quarter of these tenants, 14,478, have since transferred into local authority or approved housing body homes.

More than €600 million has been paid to landlords under the State’s housing assistance payment (HAP) scheme, with local authorities paying over their spending limits in 40 per cent of cases because of high rent, new figures show.

An analysis of the system, whereby tenants eligible for social housing are accommodated in the private sector, by the Department of Public Expenditure and Reform, found almost 50,000 households were being supported by HAP by the middle of this year.

The cost of the scheme has “increased significantly” since its introduction in 2014, when €400,000 was spent, to an expected €423 million for 2019. Minister for Finance Paschal Donohoe announced an additional €80 million for the scheme in Budget 2020.

Over the last five years, 62,739 HAP tenancies have been “created”, but almost a quarter of these tenants, 14,478, have since transferred into local authority,  approved housing body homes or other forms of accommodation leaving 48,261 households supported by HAP by the middle of this year. The additional funding for next year is expected to add 15,750 new tenancies in 2020.

Between 2016 and 2018, HAP tenancies accounted for two-thirds of all “new” social housing provided, according to the analysis by the department’s economic and evaluation service.

To date, landlords have been paid €612 million in rent for HAP tenants. However, the State’s bill for these rents was less at €503 million. This is down to the supplementary rent payments collected from some tenants by local authorities. Unlike previous housing subsidies, tenants can work and retain their HAP tenancies by making small “differential rent” payments.

However, the department said, in addition to this, tenants were making “voluntary” top-up payments to their landlords in almost 30 per cent of cases.

“For 72 per cent of all HAP tenancies, the landlord payment (inclusive of any discretionary increases) was covering the full rent. This infers that for 28 per cent of tenancies, voluntary top-up payments by HAP tenants, in addition to differential rent obligations, are contributing to the total rent received by landlords.”

The official maximum rent limits vary across the State, but in 40 per cent of cases the local authority has to break these limits using “discretionary additional payments” to secure tenancies for social welfare recipients. These discretionary payments can be up to 20 per cent more than the rental limits for general HAP and 50 per cent more for HAP tenancies for homeless people in the Dublin local authority areas, the department said.

Despite this, HAP rents remained lower than average rents, the department said. Average HAP rents were €829 in the second quarter of 2019, while national average market rents were €1,202.

However, the analysis found that increases in the discretionary payments indicated the State was being exposed to rising private sector rents, and top-ups by tenants may also be contributing the rent inflation.

“While the payment of voluntary top-ups by tenants does not fall within the scope of local authorities to manage, it is important that the use of discretion is managed by the local authorities and carefully applied as it could possibly contribute to inflation in the wider private rental sector.”

While the introduction of HAP had “greatly assisted” in providing housing supply when there was a lack of local authority housing, its costs meant it was “important” that “the proportion of new social housing stock increases in line with projected Rebuilding Ireland targets to meet social housing requirements in a sustainable manner into the future”.