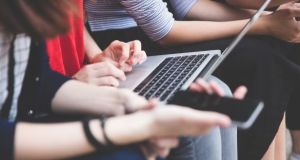 Just over half of first-year students reported experiencing sexual harassment in the form of sexual hostility since beginning college. Photograph: iStock

Almost 30 per cent of female college students have experienced non-consensual sexual penetration due to force, the threat of force or while they were incapacitated, a survey of 6,000 people has found.

The Sexual Experiences Survey, a report by the Union of Students in Ireland (USI) and the Active Consent research team at NUI Galway, examined the experiences of consent in higher education among people of different genders, sexual orientations, ethnicities and disabilities.

Just over half of first-year students reported experiencing sexual harassment in the form of sexual hostility – defined as offensive remarks about their appearance, body or sexual activities – since beginning college.

This increased to 62 per cent among second-year students and 66 per cent for those in third year or above.

Dr Pádraig MacNeela, senior lecturer in psychology in NUI Galway and co-author of the report, said the findings provide a “stark depiction” of the experiences of many students in Ireland.

“Over 1,000 of the female students who took part in the survey described incidents that correspond to rape, while one quarter of male students said they had been subject to sexual misconduct during their time in college,” he said.

Some 29 per cent of females, 10 per cent of males and 28 per cent of non-binary respondents said they had experienced penetration without consent due to force, the threat of force or being incapacitated.

Of those who reported experiencing non-consensual penetration, 49 per cent of males, 35 per cent of females, and 25 per cent of non-binary students said they did not disclose the incident to anyone prior to taking part in the survey.

Among those who did not disclose the incident, 54 per cent of females, 37 per cent of males, and 33 per cent of non-binary students said they remained silent because they did not think what had happened was serious enough to report.

However, the report’s authors acknowledged that those categorised as non-binary, which also includes transgender and gender non-conforming individuals, represents only 1 per cent of the total number of respondents, and requires additional research to be more representative.

Sexist hostility was the most common form of harassment experienced across all student groups, ranging from 46 per cent among Asian students to 70 per cent among white Irish students.

More than half of students with a disability (56 per cent) reported an experience of sexual misconduct of some form, compared with 42 per cent of other students.

The survey was carried out online between February and April with 6,026 students, representing 21 third-level campuses across the State, participating.

Róisín O’Donovan, USI vice-president for welfare, said the number of responses the survey received illustrates that consent and sexual misconduct “remains a huge issue for students”.

“While a lot of work has been done in raising awareness of issues around consent, this research shows a gap in knowledge of how to report and what happens and should happen when a student makes a disclosure or report,” she said.

Ms O’Donovan said higher education institutions could “very quickly” address this and that it needs to be “one of the on-campus actions taken as a result of these survey findings”.

Speaking at the publication of the report on Monday, Minister of State for Higher Education, Mary Mitchell O’Connor, said she was “appalled at the numbers”.

“I find it so hard to believe that this happening. I just think we’ve a lot of work to do,” she said.

The questionnaire was based on a similar model used to survey sexual harassment and violence on American college campuses, and was sent to students in 14 higher education institutions. Several other universities and Institutes of Technology had agreed to ask students to take part in the survey, but this was disrupted by the coronavirus pandemic.

The USI also advertised a link to the survey on its website.

Over 12,000 students began the survey but only 6,054 completed it. A small number of respondents were removed from the data as they were under 18 years of age, and in three cases due to “questionable response patterns” and offensive comments given in answers.

In total, 3,928 female students and 1,986 male students completed the survey, along with 42 non-binary and 11 trans students. Some 884 students had a disability, and the majority of respondents (4,689) were white Irish.