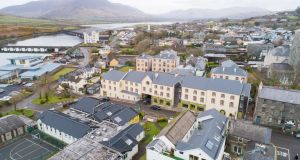 A local group criticised the Minister for failing to carry out a comprehensive assessment of the Skellig Star hotel before opening to asylum seekers. Photograph: Alan Landers

The Department of Justice has revealed an asylum seeker was placed in self-isolation days after arriving at the Cahersiveen direct provision centre in late March despite previously stating that there was no sign of the virus at the hotel for “well over a fortnight”.

Minister for Justice Charlie Flanagan said last month that no residents at the newly opened Skellig accommodation centre in Cahersiveen had displayed any symptoms of Covid-19 for more than two weeks after being transferred from Dublin.

The first cases of the virus appeared after this incubation period, wrote Mr Flanagan in an open letter to the Kerryman published in May.

However, the department has now confirmed that “following further investigation” it discovered “a form” was sent to a justice official on March 24th stating one resident at the direct provision centre was self-isolating with suspected Covid-19. This resident subsequently tested negative for the virus, the department told The Irish Times.

The department apologised on Tuesday for “any confusion or lack of clarity” around the situation and said an “honest mistake” had been made when responding last month to Fianna Fáil TD Norma Foley on the matter at an Oireachtas committee.

The department added that there was no indication the person was unwell prior to the transfer from Dublin. “We have also been able to establish that none of the persons who tested positive in the initial stages of the progression of the virus in the centre were transferred from that north Dublin hotel.”

Neither senior officials nor Charlie Flanagan or Minister of State David Stanton were aware of this correspondence prior to the department’s appearance before the Oireachtas Special Committee on Covid-19 in late May, the department said.

The department’s clarification follows calls from the Cahersiveen Community and Business Alliance for Mr Flanagan to resign in light of his department’s handling of the situation in Kerry.

The alliance said the Minister should step down for having “misled” members of the public and residents at the centre as to when the first suspected case of Covid-19 was reported at the former Skellig Star hotel.

The group also criticised the Minister for failing to carry out a comprehensive assessment of the hotel ahead of its opening for asylum seekers and for the lack of consultation with the Cahersiveen community.

The department said on Tuesday that the hotel was visited and inspected by a senior official last year but was not required until the outbreak of the pandemic. “Unfortunately, there was no time for public engagement in advance of the centre opening. A contract was signed with the Department on March 16th and the first residents arrived later that same week,” said a spokesman.

Documents released under a Freedom of Information request to the Radio Kerry News, and now publicly available online, show three pages of handwritten notes were made during a department inspection of the hotel in September 2019.

Emails between government officials reveal plans to initially turn the 56-bedroom hotel into an emergency accommodation centre for six months while refurbishments were made to convert the building into a direct provision centre.

An email sent by a senior department official on March 9th stated the Skellig star could be operational “within 72 hours”. Another email to local Kerry TDs, senators and councillors sent on March 17th noted 105 people would arrive at the Cahersiveen hotel that week with an additional 45 people transferred “in the coming weeks”.

An email sent by a department official to a councillor on March 17th stated that all 105 people had been health screened by the HSE-led medical team at the Balseskin reception centre upon arrival in the country during the previous two months.

Ms Foley accused the department last month of failing to inform the HSE of a suspected coronavirus case shortly after asylum seekers arrived in the south Kerry town.

Speaking during the Oireachtas hearing, the Fianna Fáil TD for Kerry said she had “verifiable evidence of a written communication” to the Department of Justice dated March 24th which confirmed a suspected case of coronavirus. She said the resident had been placed in isolation one day after arrival in Cahersiveen.

The deputy secretary general of the department denied any knowledge of this written communication during the hearing.

In Tuesday’s statement, the department said it had made an “honest mistake” and that there “was no attempt by the department, or indeed the official concerned, to intentionally mislead or conceal the facts around this”.

“The Department has apologised to deputy Foley for any confusion or lack of clarity around these circumstances, and has arranged for an appropriate correction to the Dáil record to a reply to a Parliamentary Question asked by her.”