People of colour in Ireland need allies ‘not bystanders’ 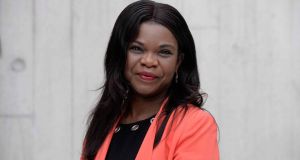 Last Thursday, Dr Ebun Joseph held an online conversation with people of colour living in Ireland. On Thursday, she is doing it again, but this time she hopes that white Irish people will join in.

“We need allies. Bystanders are of no use to us,” says Joseph, an author, inter-cultural consultant and creator of the black studies module in University College Dublin, the first to be created in any of the State’s universities.

Joseph wants people to say “I believe you” when a person of colour recounts their experience of racism: “It’s not an invitation to critique what they have said. It’s not even an invitation to tell them of how many non-racist people you know.

“When you hear people give out about racism, it is not an invitation to analyse it and tell them they’re wrong,” she says, adding that she is well accustomed to “the blowback” black people in Ireland can experience.

Recounting some of her own experiences she laughs when she lists the things that have happened to her, though they are not funny. She is viciously and frequently trolled online. She is called vile names. She is frequently told to go home. “I am home!” she replies.

Last Thursday, she hosted a free “townhall webinar” in which she and eight other black academics and writers discussed the idea of “Bringing Allyship Alive in Ireland” – basically a discussion of how white people can help. On Thursday she is holding another one.

There’s a tendency to view black Irish people as “permanent strangers”, she says, expected to remain silently grateful to be allowed to contribute here. This has a huge emotional impact.

Some young Irish-born people of colour leave for the UK once adults, or they are expected to shrug off racist bullying in school if they stay: “After George Floyd’s death people in Ireland were looking at it like, ‘It’s in the US’ . And I was like, ‘This is not just in the US. Right here in Ireland, we feel people’s knees on our neck, even me, with all my education… ’ Yes, you’re not physically killing us, but you’re emotionally and mentally killing people.”

“It’s not, ‘How do you deal with your racism?’ They should say, ‘How do we deal with ‘our racism’?” She adds that some white Irish people go through a series of stages “before they can actually hear about race and racism”.

“They hear it first as an indictment of themselves and nobody wants to hear anything bad about themselves… In order not to sit with that uncomfortable feeling, they run away from it, they push back by denying the experience.”

Racism is not about “the KKK, that you have a white hood on your head”, Joseph says. “No. Racism is every day. It’s normal. It’s written into our policies and how we operate on a daily basis.

“Even if you do nothing, just be white, all you need to do is show up and automatically you are favoured. Whiteness makes you a benefactor of the racist structures that have been put in place.”

A lot of the systemic racial equalities stem, she says, not from an overt desire to exclude black people but an implicit desire on the part of employers to hire people just like them. “Group favouritism,” she says, “is when we favour people who look like us. It’s [like when] you go to the pub and you reserve the seat beside you for your partner while everyone else has to stand waiting… That's how discrimination operates.”

Urging people to expand their networks, she says: "Add one [person of colour] to the people you follow on Twitter or Linked In. Add one to your organisation.” She laughs. “And then add one more because it’s very isolating to be the only one in there.”

People of colour should not be "just reduced" to telling stories about their worst experiences and that they are also represented more widely in Irish life. Talking about experiences of racism is painful, she says. “It’s very embarrassing sometimes.

"You don’t want to be the object of other people’s pity. ‘Oh my God, poor you’… So the black friend you have, they are not your teacher [on racism]. Ask me and that’s fine, because that’s my job as an educator. I thrive on providing information…

"But listen and find information. There are good books out there... If you work in an organisation, make sure you get somebody in who is equipped to teach you. Attend a black studies module.” And keep learning, she says. “You can’t do an hour of cultural bias training and expect to be an anti-racist… You can’t come and talk to us and then go to your all-white meetings to solve the problem.”

Talented young people of colour should steer away from places where they do not see themselves represented there, Joseph says, so organisations (including media organisations) should go beyond mentoring them to actively sponsor and champion them.

She benefited from such sponsorship herself, she says, thanks to the UCD academic Kathleen Lynch. “Come to a school in Lucan or Blanchardstown where the [classes] are very mixed. Stop going to Dublin 4 to talk about journalism. Go to Tallaght, to Blanchardstown... Talk to the young people there about your journey and what they need to do and tell them how possible it is for them to do it… Amplify black voices.”

Thursday’s webinar can be found here

Summer is on the way with warm sunny conditions for most of the next week 09:40
Covid-19: Public sector workers at home may be asked to foster children 09:34
Aaron Brady trial: Jury continues deliberations 08:50
‘We need action now’: Staycations cause surge in illegal dumping 08:32
Gove announces £650m Brexit support package for the North 07:38

1 Coronavirus: ‘Midlands lockdown’ on the cards following surge in cases in Kildare, Laois and Offaly
2 Ireland's 'R number' of almost 2 a 'serious concern' as number of new cases jumps
3 Masks Q&A: Who has to wear them in shops and what happens if you don’t?
4 How a ship abandoned by its owner brought deadly cargo to Beirut
5 Micheál Martin: Be wary of thinking virus can be governed, it ‘will come back to bite us’
Real news has value SUBSCRIBE