Abolishing post of Minister for Children would be ‘a mistake’, Tusla chief says 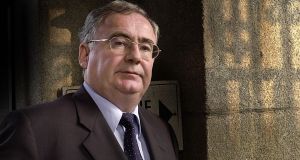 The chairman of the child protection agency Tusla has said that no longer having a cabinet minister with responsibility for children would be “a mistake that we will live to regret”.

There have been suggestions in recent weeks that the Department of Children and Youth Affairs may be downgraded in any new government formation and that the position of Minister for Children might cease to be a full cabinet post.

The minister for children was given full cabinet status by the Fine Gael-Labour coalition which took office in March 2011. It had previously been a so-called “super junior” ministry, which gives such ministers the right to attend Cabinet meetings but not vote at them.

In a statement on Tuesday morning, Pat Rabbitte, chairman of Tusla and a former government minister, said such a decision would “turn back the clock on child protection and would be a mistake that we will live to regret”.

“If it is true that the new government is designed to exclude a cabinet minister having responsibility for the care and welfare of children, I would appeal to the three party leaders to rethink this decision,” Mr Rabbitte said, referring to the leaders of Fine Gael, Fianna Fáil and the Greens, who have agreed a programme for government.

He added that it is “not too late to rethink” such a decision.

Speaking to The Irish Times, Mr Rabbitte said that if you “look at the history, the focus has not been on children, child neglect and child welfare, leading to some terrible eruptions in the recent past.

“We have now for the first time a standalone child protection agency, which, in my opinion, is overly constrained by bureaucracy as it stands, but if it finds itself reporting to a sub-department without a cabinet minister, it will worsen the bureaucratic imposition of the agency.”

Mr Rabbitte said there have been improvements in child protection provisions in recent years, but there are also “imperfections and mistakes [that] continue to be unearthed”.

The issue of child protection requires resources, he said, pointing to a recent court case in which a Tipperary man was jailed for 20 years for the rape and abuse of his daughters and sister. That case “would bring a tear to a stone”, said Mr Rabbitte.

Speaking outside court on Monday, the daughters of the jailed man in question had questioned why the authorities did not step in to save them during the decades they experienced abuse, asking whether this was due to the fact they were Travellers.

Mr Rabbitte said he thinks “it’s obvious that the State did not come to the rescue of the young women or children in that particular, terrible case”.

“The modern-day Tusla does, at least, have engagement with the Traveller community that doesn’t seem to have been the case 20 or 25 years ago, but nobody can put their hand on their heart and say: ‘I’m satisfied that a case along those lines could never happen again,’” Mr Rabbitte added.

“ I would hope it could never happen again, but as I say, the price is eternal vigilance.”

Asked if the portfolio of Minister for Children was more important than a ministry for higher education, which could also be on the cards, Mr Rabbitte said that while higher education was important, the welfare and protection of children was of the highest priority.