‘It is an offer, it is a contribution to the costs, it is voluntary, it is not a settlement, it is not an indemnity’ - Katherine Zappone 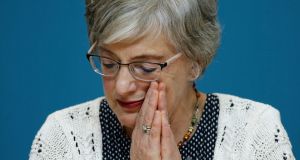 The Bon Secours religious congregation has offered €2.5 million towards the costs of a forensic excavation at the former Mother and Baby Home site in Tuam Co Galway, where it’s believed many hundreds of children may be buried.

Costs of the excavation were put at “somewhere between six million and 13 million euro,” said Minister for Children and Youth Affairs Katherine Zappone, at a press conference in Government Buildings on Tuesday. She had just announced the Government’s approval of her recommendation that a forensic excavation of the Tuam site take place.

Ms Zappone said she had been in negotiations and communications with the Bon Secours sisters since early summer “before I had the conversation with Papa Francesco, and this morning I received an offer which I presented to the Government and requested and suggested that in principle they accept the offer to share a portion of the cost for the amount over the period of time this course will take. The Government has in principle accepted the offer.”

Her reference to Pope Francis followed her exchange with him at Áras an Uachtaráin on August 25th last when she told him in Italian she was responsible for the Tuam Mother and Baby Home and that children’s remains were found in a sewage system there. “I hope the Church will make reparation for its part in this shameful chapter. It is important and I will write to you in detail,” she told him.

In the two-page letter she outlined the background to Mother and Baby Homes in Ireland and to Tuam in particular. “I believe that the church should contribute substantially to the cost of whatever option is decided by the government. This should be done willingly, unconditionally and quickly. Nothing less will demonstrate remorse. I look forward to receiving your response,” she wrote.

The Minister said on Tuesday she had “not yet received any response from the Pope but I would be fairly certain that they are aware in the Vatican of what we’re saying now and that they are taking note of that.”

She would “continue to hope that I will receive a response from him.”

Pressed as to what the Bon Secours sisters were offering, she responded “it is a fixed sum.” She continued: “we have been offered a monetary contribution by the sisters. It is an offer, it is a contribution to the costs, it is voluntary, it is not a settlement, it is not an indemnity. The (Mother and Baby Home) Commission has yet to report on the wider findings in terms of the investigation and they (sisters) have offered the Government and the State a contribution of €2.5 million towards the costs.”

The Bon Secours Hospital Group, run by the Bon Secours sisters, is the largest provider of private healthcare in the State. It has hospitals in Cork, Dublin, Galway, Tralee and more recently Limerick following its €14.6 million acquisition of Barrington’s Hospital in 2017. It also has an “elderly care village” in Cork.

It employs over 3,000 people alongside 450 medical consultants.

1 All students will not return to school even if social distancing rules are relaxed – McHugh
2 Brazilian gang held in Offaly had sub-machine gun and student visas
3 Miriam Lord: Taoiseach is trapped in a Zoom session from hell
4 Coronavirus: Further nine deaths reported along with 46 new cases
5 Emily Maitlis thanks BBC viewers for support after Cummings row
Real news has value SUBSCRIBE