Care Alliance notes 6,000 now waiting for help at home as appeal of Fair Deal levels off 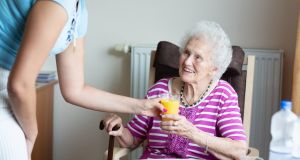 An additional four million hours of homecare is needed to cope with ageing demographics, at a cost of €110m

The Taoiseach has defended the Government’s record on home care provision after a report revealed long delays in accessing services.

Leo Varadkar said the budget for home help has been increased by 30 per cent in the past three years and over 50,000 people are receiving services.

However, demand was high and waiting times varied greatly across different regions, he acknowledged. “We need to iron that out.”

Waiting times for homecare vary across different regions from a few days to over two years, the report published today by Care Alliance Ireland finds. The average wait is more than three months.

The amount of care actually provided is on average 15 per cent less than the assessed need, it says.

More homecare services are being provided in recent years but the restoration in funding has failed to make up for cuts in 2011 and 2012, and to keep pace with the ageing of Ireland’s population, it is claimed.

An additional four million hours of homecare needs to be provided to cope with ageing demographics, at a cost of €110 million, according to CAI.

“We know that there are in the region of 6,000 people waiting for homecare,” says CAI executive director Liam O’Sullivan. “What’s equally important is how long they are waiting and are they going to get the level of homecare support they are accessed as needing.”

Residential care in nursing homes is statutorily funded in Ireland through the Fair Deal scheme, but there is no equivalent system to fund homecare. In July 2017 the Government announced a public consultation on homecare provision, amid expectations this would lead to a statutory funding scheme.

However, little has happened aside from a study of arrangements in a number of other countries. A further period of review is expected and, according to the Sláintecare implementation strategy, it will take three years to put a statutory homecare system in place.

Mr Varadkar, speaking on Tuesday, said Ireland would move to a new statutory system of home care, though he did not say when. This would be “something similar to the Fair Deal where people would have a guarantee that once they qualify that it will become available within a matter of weeks”.

Mr O’Sullivan says he is concerned there was no mention of additional resources for homecare in 2019 in the budget.

“We urge the Department of Health to instruct the HSE [Health Service Executive] to set out ambitious targets for the delivery of extra homecare hours in their 2019 service plan.”

The report makes 10 recommendations, including calls for more transparency in the sector, better information for prospective clients, and the use of a family carer assessment tool.

It is also critical of the response received from some HSE regions to a freedom of information request seeking waiting times which was submitted in preparation of the report. Eight of the nine HSE regions provided some information but only three provided a full response.

One HSE region said it was “not possible” to calculate the time between an application for homecare being received and it being approved, a response the report says “lacked credibility”.

Accessing homecare providers who can respond to demand is an increasing challenge, the report notes, due to improvements in the labour market. This led to significant delays in some cases where a person was approved for homecare.

The report notes that for the first time, the take-up for Fair Deal has levelled off and even dropped recently; it says this may point to a preference for the delivery of care at home rather than in an institution.

“It may also be that increasing asset prices in recent years makes the Fair Deal scheme relatively less attractive as the contribution made by the client towards the cost of residential care under the scheme is directly related to the total value of the client’s assets.”

On average, clients received about 6.5 hours of homecare per week in each year between 2008 to 2016, the report calculates.

Care Alliance Ireland is a national network of voluntary organisations supporting an estimated 300,000-plus carers in the Republic.