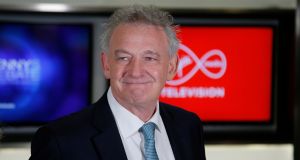 Traveller families will stage a protest during a visit by Peter Casey (above). Photograph Nick Bradshaw/Irish Times

An extended Traveller family in Co Tipperary will hold a silent protest against presidential candidate Peter Casey on Thursday when he visits houses they had been expected to move into.

The McCarthy families - comprising nine households living at a ‘camp’ at Cabragh Bridge outside Thurles - say they are horrified at the “media campaign being waged” against them, particularly since comments by Mr Casey in recent days.

Mr Casey, who will visit six houses built by Tipperary County Council for the families, has described the families as “selfish” for seeking stables and paddocks with the houses - as has been widely reported.

They say they have lived at Cabragh Bridge for over 40 years, have electricity, running water and toilets, and are “happy” there.

They say council officials approached them about 12 years ago, asking they vacate the slip road they occupy.

They say their father, the late Bill McCarthy, agreed to the move into planned houses if horse-grazing land was provided adjacent. The families have kept horses for generations, describing them as being “family”.

In a statement the families said: “We find that we are now being used again and are at the centre of what seems to be a hate campaign in social media.”

They are appealing to media to report the “facts of our situation”.

“The media story has been very simple - Travellers are refusing to take houses built for them by a very caring county council because stables (and even ‘paddocks’) are not being built for them.”

“We have never asked for houses. We never asked for stables. And we never asked for paddocks. We made an agreement with the local authority that we would move from our current location if grazing land was provided for our horses - something that is dear to us and a central part of our lives for generations.

“This is not asking for anything outside recognised government policy and nothing more than what we were promised.

“Instead of fulfilling their promise to us, Tipperary County Council have decided to wage a campaign against us through the media. They have not even talked to us, but seem to want to communicate with is through radio and television.”

They say they no longer trust the council. “We are a lot more prepared to stay living in substandard living conditions than we are to have our culture and identity taken away from us.

“If Tipperary County Council decide to locate other families in these houses, we will do our very best to be good and respectful neighbours - as we have been doing in this community for forty years.”

They say the situation could have been resolved quickly and with little money.

A spokesman said Tipperary County Council recognised the importance of horses to Traveller identity and was working to resolve the situation.