Amnesty and ICCL call for Yes vote in blasphemy referendum 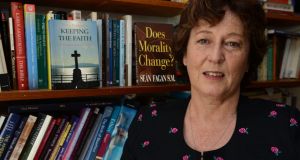 Gina Menzies said the blasphemy clause in the Constitution ‘doesn’t protect freedom of religion and belief, in fact it undermines it’. File photograph: Cyril Byrne

Amnesty and the Irish Council for Civil Liberties have issued a joint appeal for a ‘Yes’ vote in the blasphemy referendum. And Catholic theologian and lecturer in bioethics Gina Menzies has joined the call for a ‘Yes’ on Friday.

At a press conference in Dublin on Monday, Ms Menzies said the blasphemy clause in the Constitution “doesn’t protect freedom of religion and belief, in fact it undermines it”.

She pointed out that “the Irish Churches, Catholic and Protestant, recognise the impact of blasphemy in a number of countries, where torture, persecution and the death penalty are used to oppress minority religions”.

“If passed, this referendum allows Irish law to protect both freedom of speech and freedom to practise one’s religion or beliefs.”

In a statement earlier this month, Ireland’s Catholic bishops described the provision against blasphemy in the Constitution as “largely obsolete” and said its retention could give rise to concern “because of the way such measures have been used to justify violence and oppression against minorities in other parts of the world”.

Last week the Church of Ireland also called for removal of the blasphemy provision from the Constitution in next Friday’s referendum. They too emphasised that there was a fundamental human right to freedom of religion but also the freedom of expression “within limits”.

A Yes vote on Friday “would support freedom of expression here and around the world, and would have no impact on the rights of followers of any religion or belief”, said Amnesty and the ICCL in a joint statement on Monday.

ICCL director Liam Herrick said “criminalising blasphemy has no place in a modern democracy such as ours”.

“Irish people don’t want criminal prosecution for those who call into question the authority of religious teachings,” he said. “This is not to mention the fact that the courts are not equipped to arbitrate what is, or is not, a genuine religious teaching.”

Religious freedoms were already protected under Article 44.2.1. of the Constitution, he said. A Yes vote on Friday “would mean that simply offending people is not a crime”.

He also said passing the referendum “ would mean states like Pakistan can no longer justify their own severe anti-blasphemy laws by pointing to our Constitution”.