Tuam babies exhumation unlikely to start until next year 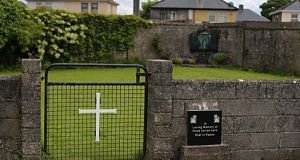 Site of the mass grave for children who died in the Tuam mother and baby home in Galway.

Remains at the Tuam mother-and-baby home should be exhumed, identified where possible and reburied, Minister for Children Katherine Zappone announced on Tuesday.

However, the excavation cannot happen without specific legislation first being passed by the Dáil. And this is a process unlikely to begin until next year at the earliest.

Ms Zappone offered “personal apologies” to the victims and to those affected by the events at Tuam, first brought to public attention by local historian Catherine Corless who found death certificates for 796 infants.

Ms Corless brought the burials to public attention and welcomed the announcement. She said it would be a “healing” for those affected.

“It’s a huge statement for people who carried the stigma of illegitimacy with them all their life,” she said on RTÉ radio.

“They were [considered] lesser people and to see our Government just trying to make reparations for what happened . . . it gives them a new status. And it is a healing for them and that is what I have been campaigning for all along.”

Ms Corless said she had only found out about the Government’s decision from a reporter. The historian recovered hundreds of death certificates relating to the children buried at the site.

She also welcomed the approach that the Government has opted to take, which will include attempting to identify the remains. “It covers everything,” she said.

Speaking after travelling back to the site, she said there had been a concern the issue would be “dragged out”. But Ms Corless added that the ultimate decision was a “huge day for all the survivors”.

The historian said she is very thankful for the Government decision: “I see it as a huge statement for justice.”

There are no firm indications as to the total numbers that may have been buried on the site as yet, but Ms Zappone conceded there is likely to be a delay in proceeding with the disinterment of remains.

“The Attorney General’s advice is that we need specific legislation to do this unprecedented work,” she said. “I can’t say a definite timeline. I understand the pain and frustration that will cause.”

The cost of the exhumation will be between €6 million and €13 million. And the Bon Secours Sisters have contributed €2.5 million towards this, said Ms Zappone.

At its meeting this morning, the Government approved Ms Zappone’s proposal to a “phased approach to the forensic excavation and recovery of the juvenile human remains insofar as this is possible”.

Ms Zappone also said that the work on the site would use “systematic . . . test excavations” to locate potential burials.

Remains will be individualised and where possible identified, and arrangements made for reburial.

However, the testing and potential excavations will not extend to areas where houses and gardens have been built on the site, a statement from her indicated.

Ms Zappone said the decision was informed by the detailed technical advice. And “most importantly, out of compassion and respect for the rights and dignity for the children believed to be interred on this site”.

Ms Zappone said she was committed to ensuring that “all the children interred at this site can have a dignified and respectful burial”.

The Minister added she understood “that this is a hugely important decision for all connected to the site in Tuam, most especially those who believe they may have a loved one buried there and those now living close to the site”.

She said while the legal and technical challenges should not be underestimated, a “comprehensive and scientific approach provides us with the best opportunity to address the many deeply personal questions to which former residents and their families need answers”.

Ms Zappone said such a task has never been undertaken or contemplated previously.

“It has taken us more time than first anticipated to examine the unprecedented technical and legal issues which arise in seeking to appropriately respond to the tragic discovery of comingled juvenile remains at this site.”

She said that the report of the Commission of Investigation into Mother and Baby Homes would be published next year. “We must prepare for further truths to come to the fore,” she added.