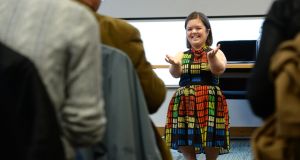 Sinead Burke, writer and campaigner, addressing a seminar organised by the Press Council of Ireland, and the Office of the Press Ombudsman on the role of the print media in advancing the participation and representation of minority communities in society. Photograph: Dara Mac Dónaill / The Irish Times

Press Ombudsman Peter Feeney has upheld nine press complaints this year and, on average, receives 300 such complaints annually, he said on Tuesday. “A lot are resolved through mediation,” he said.

He said, regarding the press in Ireland, “It is better now than 10 years ago. Editors are more responsive [to complaints].”

The majority of Press Council members “are independent members and not from the industry,” he said. “I do think its existence has made it easier to get redress and to make complaints,” he said.

Where social media is concerned, Mr Feeney said, “We are moving to a position where they will have [to take] responsibility” for material published on their sites. Facebook and YouTube have argued that they are not publishers, but the grounds for such arguments were “getting thinner and thinner,” he said.

Mr Feeney was speaking in Dublin at a seminar on minority communities and the press. It is one of a number being held this year to mark the 10th anniversary of the establishment of the Office of the Press Ombudsman and Press Council of Ireland.

The opening address was by writer and disabilities campaigner Sinéad Burke, who spoke on the key role print media plays in attitudes to minority communities in society. “Disabled people do not exist to inspire non-disabled people and should not be presented in that way,” she said. Likewise, it was wrong to expect all members of minority groups to be advocates, she said.

Anna Quigley, of the Citywide Drugs Crisis Campaign, objected to the use of the word “junkie” when describing people who were addicted to drugs. “It’s a really strong negative identity and is used a lot in media,” she said. She noted how though 97 per cent of public order offences were alcohol-related, as were 76 per cent of rape cases, “alcohol is not stigmatised in the same way.”

Mike Allen of Focus Ireland said that although rough sleepers made up just one per cent of homeless people, 23 per cent images to illustrate homelessness were of rough sleepers. He further pointed out that figures for the homeless did not include numbers for rough sleepers.

Neil Cotter, head of news at the Irish Sun, felt that “journalists in Ireland are sympathetic, empathetic but there are occasions when media can cross the line.” However, he believed “Irish media are fairly decent when compared to other countries. We are more nuanced and at a cost to sales. Readers can think we’re too soft.”

Still “there is a preconception about what tabloids are. When you say who you work for, you can get ‘the look’,” he said. Meanwhile, his paper had been supporting a campaign this past year for defibrillators in schools.

Niall Donald, news editor at the Sunday World, said, “No newspaper gets everything right all the time” but “Ireland has a distinct tabloid culture, to the UK.”

He instanced how in the lead-up to the Brexit referendum in 2016 the Daily Express had 279 negative stories about immigrants, “stories that simply do not appear in Irish papers”. Inflammatory stories were “very rare” in Irish papers,” he said, even though homophobia and racism exist in Ireland.

”Tabloid newspapers make a good effort not to reflect those voices,” he said.

Thomas McCann of the Traveller Counselling Service raised the issue of “offensive opinion pieces” which “reinforces the prejudices of contributors.” Martin Collins of Pavee Point criticised “the ongoing narrative vilifying and demonising my community.” He was “party to five complaints to the Press Council over the past 10 years, none of which was upheld,” he said.

He referred in particular to an article in the Irish Daily Mail. Press Ombudsman Peter Feeney said, in that case, the paper had offered a right of reply of the same length in the same space but this was not availed of. “It is my view that was adequate,” he said. Generally, he said, “I get very few complaints about reports concerning Travellers.”