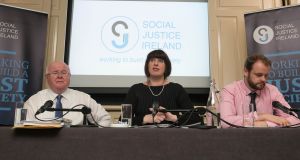 A single person earning €75,000 will gain almost five times more from Budget 2018 than a single person on €25,000, according to Social Justice Ireland (SJI).

Fr Seán Healy, director of the think-tank, said the choices made by Government in the budget were “skewed” in favour of the better-off in a way that was “disturbing”.

Presenting the group’s annual budget analysis, he said that unless there was a “fundamental change in Government thinking” on housing and poverty, there would be “homelessness and child poverty for years to come, and they will be rising”.

The 24-page document, prepared overnight following publication of the budget, refers to “low tax, low investment, low ambition”, saying that given the scale of the social crises, in low pay, healthcare, education and housing, “the decision to cut income taxes seems both perverse and contradictory. Irish people deserve better than this.”

It says changes in the Universal Social Charge and income tax “provide larger gains to those on higher incomes compared to those on lower incomes.

Low-paid workers “will experience no gains from the increase in the threshold for entering the top tax rate and experience limited gains from the reduction in the USC. As working households they do not receive any welfare benefits.”

By international standards Ireland has very high rates of low pay, with 24 per cent of full-time employees on €24,000 or less per year. Among OECD countries, just Colombia (25.3 per cent) and the United States (25 per cent) have a higher proportion of low-paid full-time workers.

“Very many of these workers received little or no benefits in Budget 2018.”

For the same amount of money (€397 million) it has cost Government to change tax and USC rates in the Budget, it could have tackled this in-work poverty, says SJI.

It could have introduced “refundable tax credits” where workers who don’t earn enough to gain from tax credits gain the value of them. In addition, the personal tax credit for all workers could have been increased by €100 per year.

“In the broader context of widespread pay increases and tax cuts, there is potential of the relative position of welfare recipients to disimprove. If divides open up, as in the late 1990s, poverty for this group will rise.”

The continued different treatment of young unemployed – those under 26 get lower rates of Jobseeker’s Allowance – was discriminatory, said Fr Healy.

“Frankly, I don’t accept that it’s an appropriate way to deal with young people,” he said.

“Every year the budget is about choices, and choosing to allocate resources in a particular way. Budget 2108’s failure to address some of the major challenges Irish people currently face such as the housing crisis or the incidence of Ireland’s low pay on anything like the scale required, is disappointing.”