When it comes to death, we need more rights than last rites, conference told 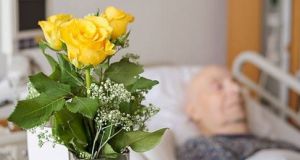 “We have the right to have a say in our care...including at the end of life.” Photograph: Getty Images

As citizens and as a society we need to break the taboo that surrounds death, Mrs Justice Catherine McGuinness has said.

Giving the Mary Holland Commemorative Lecture at the Irish Hospice Foundation Forum on End of Life in Dublin on Tuesday, the retired Supreme Court judge said: “We need to assert clearly that when it comes to end of life we need more rights than the last rites.

“We need to support each other to develop a greater sense of personal responsibility, and put effective systems in place to enable people to act responsibly.”

She told delegates at the conference that in the next 10 years over 300,000 people would die in Ireland, and three million would be bereaved.

“Up to €1.3 billion is being spent on end-of-life care, and we don’t know whether it is being spent wisely. It matters to those left behind because then we can get on with the business of living.”

Mrs Justice McGuinness urged people to consider filling in a Think Ahead document which records people’s care preferences in the event of emergency serious illness or death when they cannot speak for themselves.

“Think Ahead recognises that dying is everyone’s business. We have the right to have a say in our care...including at the end of life. But we also have the responsibility to let other people know our decisions and spare our loved ones and families, who might otherwise have to make important decisions without guidance, at what is a very difficult time.”

There are currently 65,000 Think Ahead documents in circulation, and if even one was completed that could only be a good thing, Mrs Justice McGuinness said.

Conference keynote speaker Prof Jenny Kitzinger of the University of Cardiff told delegates one in three people would lose the ability to make their own decisions at end-of-life.

She also said there was a real issue with non-beneficial treatments, that is any treatments, procedures or tests administered to elderly patients who are naturally dying when that treatment will make no difference to their survival.

“One in three patients receive treatments at end-of-life that have no benefit to them near their end of life; 28 per cent get cardiopulmonary resuscitation, 42 per cent are admitted to intensive care ...30 per cent receive dialysis, radiotherapy and transfusions, and 33 per cent are getting chemotherapy in their last six weeks of life.”

She urged people to have their say now about end-of-life issues. It was not only important for the dying, who know they have a terminal diagnosis, but especially for people who were not dying.

The People’s Charter on Dying, Death and Bereavement in Ireland, the country’s first such charter, was also launched at the conference. Based on a survey of almost 2,600 people, it outlines how people wish to talk about, prepare and live with death and bereavement.

Foundation chief executive Sharon Foley said the charter was a powerful tool to bring to the Government. “The people of Ireland want to have their say about end-of-life. Being treated with and maintaining dignity matters to people.”