‘When you come back you don’t exist’: Emigrants speak out

Bureaucracy, insurance and public services among key obstacles to relocating 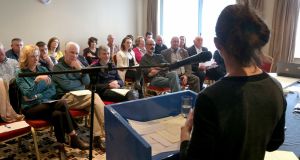 Some of the attendance during the discussion forum to address challenges faced and proposed solutions for returning Irish emigrants, at the Connacht Hotel, Galway. Photograph: Joe O’Shaughnessy

Irish emigrants who have recently returned home say that bureaucracy, insurance costs and problems with getting grants and public services are among the key obstacles to relocating here.

A number of them spoke in Galway on Saturday as part of a Department of Foreign Affairs review of relocation barriers. Minister of State for the Diaspora Ciaran Cannon said that small steps have been made to help Irish emigrants return but that much more needed to be done.

The chairman of the Irish Lobby for Immigration Reform, Ciaran Staunton, said Government departments were making some “crazy decisions” that discouraged people from returning.

“There’s people within the Department of Agriculture who have decided they don’t want to give these people grants when they come back from America, and yet you see that department has a €100 million underspend. These people feel like unwanted aliens, because there is a complete lack of empathy.”

Karen McHugh of Safe Home Ireland, which was was formed in 2000 to support returning older Irish emigrants, said: “You need a huge paper trail to come back. That’s one of the issues we would come up against so many times with people. They have no paper, so it’s impossible to work with them.

“We are trying to backtrack and get all that paper sorted. But you can’t get a PPS, you can’t open a bank account, you can’t get a public-services card. You can get nothing without paperwork. People need to research and have as much paper as possible.”

He gave an example of improvements in the way that motor insurers treat foreign driving experience. “The insurance federation, along with our Department of Finance, have put a system in place where, if you can produce evidence of safe driving in another jurisdiction, that will now be taken into account here.

“And in the new year if you are someone coming home from the USA, and you have 10 years’ driving experience, you won’t need to do 12 lessons. We are retaining the advanced lessons, but it will make people’s lives a lot easier,” the Minister said.

Among those attending the conference was Siobhan Laffey-Gibney, who moved back to Ireland in 2012 after more than a decade in Australia.

“With regards to drivers’ licences we were very lucky, too, because Australia and Ireland have a reciprocal thing. After 12 months you can hand in your Australian licence, they send it back to Australia and then you get an Irish one.”

Loretta Kenny, who is 52 and from Castlebar, in Co Mayo, came home two years ago, after moving to New York in 1987. Insurance costs were a major problem, and she was “hugely disadvantaged in the jobs market”, she said.

“When you come back you don’t exist in this country”

Yvonne Tierney, who is 40 and from Claregalway, in Co Galway, left Ireland for Chicago in 1998. Her quality of life has drastically altered since she arrived back in the country in June of this year, she said.

Her mother passed away, and along with her husband, Paul, she returned home to live with her father in Galway, hoping to continue working in the fitness sector.

“None of our qualifications work here. My husband has worked on some of the biggest projects in America for 10 years, but he comes over here and people look at him like he isn’t even an electrician.

“I had to get recertified when I came back. I had worked in the stock market for 15 years over there, but I wanted to pursue fitness back here, because it’s a great time to be in it. But I have to work in a coffee shop, because none of my qualifications matter here.”

“I can’t go to the department. No one will help me there”

Rita Feeney, who is 36 and from Ballybane, in Galway, left Ireland during the recession in 2008 and studied teaching in the UK before going on to work in Dubai and the United States.

“I teach computers, and that’s a problem here, because it is not on the curriculum. It is next year, but I have to settle for subbing around the place here again,” she said. “I am being told that I can teach business and accountancy, because that’s what I would have done for my Leaving Cert, but I still can’t get a solid job anywhere.

“Another side of it was my car insurance. Once you leave the country for two years you lose your no-claims bonus, and I didn’t know this. I was a named driver under my dad’s policy, but I only did 13 months on that, and when I came home I was being quoted €3,000 in some places, although I had driven on some of the most dangerous roads in the world when I was away, and that’s not good enough.

“My advice to people coming home is to join all the Facebook groups you can and talk to people who have already made the move. I am on the Voice for Teachers Facebook group. That’s where I get my answers. I can’t go to the department. No one will help me there.”