Budget 2018: All weekly social welfare payments to go up by €5

Elderly to see slight improvements in their situation, beyond the pension increase 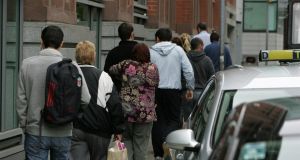 Jobseekers under 26, who are on reduced rates, will receive the €5 increase. Stock photograph: Frank Miller

All weekly social welfare payments will increase by €5 from March 26th, 2018, while the qualified child payment – which is paid for each child to parents dependent on social welfare – is going up by €2.

This is the first increase in this payment in eight years – a freeze that had come in for much criticism in recent budgets.

Other measures on the Social Protection package, aimed particularly at children in the lowest-income households, include an increase in the earnings disregard (ie the amount a person may earn from employment and still get the full rate of benefit) for those on the One Parent Family Payment and on the Job Seekers Transitional scheme by €20 a week, to €130.

The threshold for receipt of the Working Family Payment (WFP) – the new name for Family Income Supplement, or FIS – is also being increased, from the end of March, by €10 per week for families with up to three children.

The Back to Work Family Dividend, which was to end in March, is to be retained “because it works” said Minister for Social Protection Regina Doherty.

She identified the 130,000 children in consistent poverty as one of the “most vulnerable” groups in society and said she was determined these children would not be left behind. *

“If I am here next year and the year after, there will be more of the same,” she said, adding it was her ambition to increase further the earnings disregards for lone parents and income thresholds for those in receipt of the WFP.

This payment is being renamed – from FIS – in an effort to increase awareness of it among working families, she said, as take-up of it was less than expected.

Unlike last year, jobseekers under 26, who are on reduced rates, will receive the full €5 per week increase. This group is also to be targeted with a new Youth Employment Support Scheme to begin in 2018, details of which will be announced in coming weeks. Asked whether it would be similar to the now-closed JobBridge internship programme, which was criticised for sometimes being a source of cheap labour for employers, Ms Doherty said it was her view that JobBridge had been “one of the most successful schemes we have ever run”.

The new scheme would be voluntary and would provide advice and supports to young people finding it difficult to access employment, she said.

There has been no change to child benefit, what used to be known as the children’s allowance.

The Christmas bonus will be paid at a rate of 85 per cent in December, as it was last Christmas.

Older people will also see slight improvements in their positions, beyond the pension increase. A new telephone support allowance of €2.50 per week for those in receipt of both the living alone allowance and the fuel allowance is being introduced.

A telephone allowance which was paid to all older people, worth €9.50 per week, was controversially abolished in 2014. The new payment is targeted at poorer old people living alone.

The weekly fuel allowance, of €22.50, which is paid for 26 weeks a year, will be paid for an extra week, at the end of the season in 2018, benefitting 375,000 households – particularly pensioners, people with disabilities, lone parents and long-term jobseekers.

Ms Doherty said it was the Government’s priority to “reward work” and she wanted to see groups like lone parents and people with disabilities benefit from participating in the improving economy, but also to protect those who needed the support of the “social contract”.

Minister for Finance Paschal Donohoe said everybody should have the opportunity to benefit from an economy emerging from recession. “The increases in social welfare payments and more targeted measures for working families announced today will have a positive effect on redistributing income and in reducing the risk of poverty and inequality.

“I believe these changes are an essential contribution to a fairer and more decent society,” he said.

*Correction: An earlier version of this story incorrectly stated 113,000 children are living in consistent poverty. It should have read 130,000.