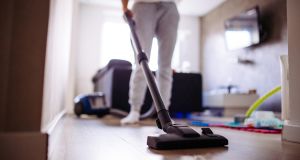 Almost 90 per cent of women in the State do housework compared to less than 50 per cent of men. Photograph: Istock

Almost 90 per cent of women in the State do housework compared to less than 50 per cent of men, a gap that has remained the same since 2005, according to an EU gender equality report.

It found a persistent inequality in time use across the EU, with gender gaps in unpaid care persisting, and only one in three men engaging in cooking and housework daily.

The gap was smallest in Sweden where 56 per cent of men and 73 per cent of women undertook housework there every day. In Ireland, while men did more housework in 2015 than in 2005, women did too, and the gap between them remained at 40 per cent.

The report said women spend a disproportionate amount of time carrying out unpaid care and housework, even though women’s labour force participation has increased significantly since 2005. The care burden was highest among non-EU born women, the index report said.

It said the share of time devoted to paid and unpaid work meant that men had more time to participate in social, personal, leisure and civic activities.

In Ireland, 48 per cent of male workers took part in sports, cultural or leisure activities outside the home several times a week compared to 40 per cent of women.

Overall between 2005 and 2015, the report found nearly all EU member states had moved “in the direction of becoming more gender equal”, but progress has been “rather slow”.

The largest improvement was in Italy, though it remained below the EU average. While Ireland was below average for gender equality in 2005, it increased by 7.6 points, lifting it above average, to 69.5 points out of 100 in 2015. It is now in eighth place overall, compared to 10th in 2005.

Sweden has been consistently first over the last 10 years, while the UK has moved from fourth to sixth place.

The report looked at six core “domains”: work; money; knowledge; time; power and health, and scored each one out of 100. It said of the six, most improvement has been made in the area of power, while inequalities had increased in the area of time.

Ireland’s best result was in health, putting it in fifth place across Europe, followed by time in sixth place; knowledge in seventh place; work in eighth place; money in ninth place and power in 12th place. The country showed no disimprovements since 2015.

Progress toward gender equality at work across the EU has “stagnated”, the report said as gender segregation in employment persists and there are still barriers for women accessing the labour market.

In 2015 the gender gap for employment in the sectors of education, health and social work and women-dominated occupations, widened in almost all EU countries, and increased in Ireland by four percentage points.

Men remained over-represented in science, technology, engineering and mathematics sectors and there was no change over time. There was also a marked gender gap in terms of subjects pursued by women at third-level education, with an increase in that gap in Ireland over a 10-year period.

The share of women at risk of poverty in Ireland decreased by four per cent. And Ireland was one of only nine countries to meet a target to provide childcare for at least 90 per cent of children between three years and school age.

Ireland also improved gender balance in decision-making by more than 10 percentage points. But in common with many other countries it scored poorly for gender equality in sports decision-making bodies, with only 16 per cent of women on the boards of Olympic sports organisations.