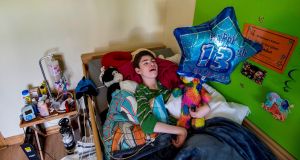 Brendan Maginnis (13) has severe cerebral palsy, uncontrolled epilepsy and scoliosis: the Irish Disability Federation has said there is a “dire lack of appropriate housing” for people with disabilities. Photograph: Brenda Fitzsimons/The Irish Times

The single mother of a severely disabled child, who is “trapped” in the private-rented market and unable to access suitable housing, is an example of a “housing crisis within a crisis”, say disability advocates.

Tracy Maginnis – whose son Brendan (13) has severe cerebral palsy, uncontrolled epilepsy, scoliosis which is beginning to crush his internal organs and is non-verbal – is renting a house in rural Kildare, in which the doorways are too narrow for easy wheelchair access. It has steps to the front door and no safe, wheelchair-accessible bathing facilities.

She pays €700 a month for the house, in which she and her children – Brendan and Declan (9) – have lived since November 2016 following the breakdown of her marriage.

Although she has been approved for the Housing Assistance Payment (HAP), she cannot find a suitable house where the landlord will accept her as a tenant and also accept HAP.

A full-time carer, she is dependent on social welfare and so cannot qualify for a local authority affordable mortgage. In addition, she has been told there is no prospect of getting a council home in the near future.

There is, says the Irish Disability Federation, a “dire lack of appropriate housing” for people with disabilities, leaving families such as them particularly vulnerable to the vagaries of the market.

“If the household cannot afford to buy their own home and cannot get social housing, they are left to the private market. We are aware of many, many families in this situation.”

Fiona Donovan, policy and research officer with the federation, said the Government’s plan to tackle the housing crisis, Rebuilding Ireland, was “overly focused on HAP to deliver social housing” and there was concern that though “there is a big push to address the housing crisis the need for a push to deliver appropriate housing for people with disabilities could be lost”.

Awaiting detailed census data on the housing of people with disabilities to be published by the Central Statistics Office next month, the federation estimates about 7,500 households with a disability are on social housing waiting lists and more than 1,000 people with a disability under the age of 65 are “inappropriately” in nursing homes due to a dearth of suitable housing.

Ms Maginnis was glad to get the house she rents, but the conditions “really worry” her.

A report from Kildare County Council’s environmental health office, dated August 18th, refers to the walls, floors and ceilings of the upstairs room as “unfinished”.

“Holes are evident in the roof felt covering the surfaces of the ceiling. The presence of bird droppings on the floor indicates birds may have access through the defective roof.” It also refers to the heating and the fridge not working.

Ms Maginnis says the bathroom is unsuitable and she needs a wet-room for Brendan.

Since being approved for HAP she has viewed about 20 rental properties – bungalows or homes with bedrooms and the main bathroom downstairs, and with wider doorways and halls.

The landlords or letting agents for any that would suit, she says, either would not take HAP, or said the home would not be suitable.

“We just need a break. Declan needs it too. He is very sensitive and he is finding this stressful too.”

The DFI is calling for an increase in capital funding and that it be spent on “universal housing” design that would suit all people including those with disabilities, as well as tax incentives for landlords to adapt their properties for people with disabilities.