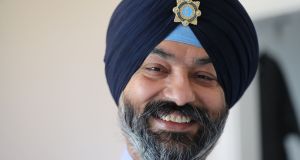 The first practising Sikh to become a member of the Garda Reserves has said his attestation into this force this week wearing a uniform which includes a turban was a “proud moment”.

Ravinder Singh Oberoi, who was attested as a member of the Garda Reserves this week, said he was glad an Garda had finally allowed to incorporate the turban into their uniform and that this acceptance was “a very happy end to a long journey”.

On Tuesday, Mr Oberoi travelled to the Templemore Garda College in Tipperary to be sworn in as a member of the reserves, fourteen years after he first started his training to join an Garda Síochána’s voluntary and unpaid policing body.

Mr Oberoi, who has lived in Ireland since 1997 and works in IT, had completed most of his required training to be a member of the reserve in 2007 when he discovered he would not be allowed to wear his turban as part of the Garda uniform.

He challenged this before an Equality Tribunal and the High Court which ruled the Garda was not guilty of employee discrimination as Garda Reservists were legally volunteers rather than employees.

However, in 2019, Garda Commissioner Drew Harris announced the sanctioning for alterations to the Garda uniform code to allow members to wear certain items of clothing relating to religious groups, including headscarves for Muslims and turbans for Sikhs. The commissioner said the move was aimed at increasing the recruitment of ethnic minorities into the force.

Mr Oberoi says deciding to drop out of the training in 2007 was “very disappointing” and that not being able to wear his turban “went against the values and ethics that an Garda Síochána promote”.

However, following the decision to alter the uniform code, Mr Oberoi underwent a refresher training course last summer and operational training on the beat in Dublin in October and November 2020. Tuesday’s event was “quite emotional”, he says. “After 14 years it was a proud moment as a Sikh man to be able to wear a turban as part of the uniform”.

Mr Oberoi is the only practising Sikh in the force but hopes his involvement will encourage young people from Ireland’s minority communities to consider a career in policing. While his post is voluntary, Mr Oberoi says he is looking forward to starting on the beat next week and playing a role in the Garda’s national response to the Covid-19 pandemic.

“My faith is quite important, especially during these Covid times, it’s what keeps you going. It’s a great honour to be able to call this country my home and now to be accepted in the attire I wear.”

Seventy-one new gardaí graduated last Tuesday after completing a modified training programme which focused on on-the-job experience rather than training in the Garda College.

A further 69 members of the Garda Reserve were also attested to aid in the policing of Covid-19. The new reserve gardaí are made up of 37 men and 32 women. They come from Ireland, England, Germany, Georgia and Lithuania.

Reserve gardaí have undergone specific training to prepare them to police Covid-19 regulations and they will focus on engaging in local patrols and crime-prevention measures.

“The 69 Garda Reserves have willingly committed their time to support the ongoing efforts to keep people safe and will form an integral part of our policing effort moving forward,” Mr Harris said.