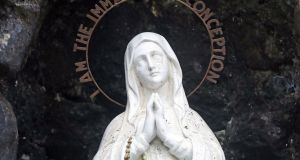 A statue of Mary in a grotto at the Sean Ross Abbey in Roscrea, Co Tipperary, which was a mother and baby home operated by the Congregation of the Sacred Hearts of Jesus and Mary from 1930 to 1970. Photograph: Niall Carson/PA Wire

One of the congregations expected to contribute to the redress schemes to be established in the wake of the Commission of Investigation into Mother and Baby Homes report has already made a substantial donation to an earlier scheme.

The Daughters of Charity, which ran three of the homes mentioned in the report, was also part of the 2002 deal between the State and 18 congregations as part of the scheme for providing redress to people who had suffered abuse in residential institutions.

The congregation has paid €19 million in cash and property to the State as part of its contribution to the arrangement. A total of €364.8 million has been paid by the 18 congregations towards the redress scheme, which is likely to cost €1.5 billion, with the bulk of the money coming from public funds.

The contribution from the Daughters of Charity is the complete amount the congregation committed to pay in the wake of the 2009 report on the residential institutions.

As well as being involved in the running of industrial schools, the order of the Daughters of Charity was associated with the health authority-owned mother and baby home Pelletstown, later known as St Patrick’s, on the Navan Road, in Dublin.

They ran the home and were salaried employees of the local authority. The home closed in 1985.

The congregation was founded in France and came to Ireland in 1855. The Irish province of the order has 25 “houses” in Ireland, and a further five in Kenya, according to its website.

It is involved in the provision of hospice care, disability services, education, homeless services and community care.

The other two orders that ran mother and baby homes covered in the report published on Tuesday are the Sisters of Bon Secours, and the Congregation of the Sacred Hearts of Jesus and Mary.

The Sisters of Bon Secours ran the mother and baby home in Tuam, Co Galway, which was owned by the local authorities. The home closed in1961.

The congregation, which is associated with the Bon Secours hospital group, has said it will contribute to the redress schemes being considered in relation to the mother and baby homes.

It has already donated €2.5 million towards the cost of excavation work at the site of the former home in Tuam, where it is believed hundreds of children were buried.

The Congregation of Sacred Hearts owned and ran three homes covered in the commission’s report: Bessborough, in Cork; Sean Ross, in Roscrea, Co Tipperary; and Castlepollard, in Co Westmeath.

Neither the Congregation of Sacred Hearts nor the Daughters of Charity have stated publicly that they will contribute to any redress schemes, though it is understood both intend to contact the Government in relation to the issue.

The Congregation of the Sacred Hearts is an international congregation with in excess of 100 sisters that came to Ireland in 1922, when it became involved in Bessborough.

The congregation’s work with unmarried mothers at Bessborough was phased out during the 1980s, according to its latest set of filed accounts.

The accounts, which state that the sisters provide services in Ireland, Zambia, El Salvador and elsewhere, show it depends in part of funds it receives from a branch of the order in the UK.