Remote working ‘revolution’ bringing people back to towns and villages 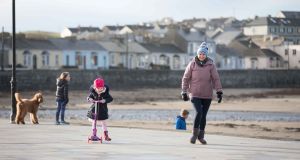 Paula and Freya Crotty, who recently moved back to Kilkee from Limerick, out for a walk on the beach. Photograph: Eamon Ward

The pandemic has “accelerated” the shift to remote working in the places where services are available: “Here in west Clare, we are already seeing the benefits,” says Murphy, a tourism consultant by trade.

The 2016 census offered stark statistics about the future of the west Clare resort of Kilkee. Over the previous five years, numbers had fallen by 15 per cent to 972 – a pattern repeated across west Clare.

Since the Covid-19 outbreak, Kilkee’s numbers have jumped “comfortably” by 250. “People came last March to their second home during the first lockdown and they haven’t left. Kilkee is now their primary residence,” he says.

Others born in Kilkee, but who left to find work have returned, too, often along with their young children. Paula Crotty is one, coming back with her husband Ger and their three children, Daniel (9), Clara (7) and Freya (3) last year after a break of 20 years.

Crotty states: “Returning to Kilkee was never on the cards. We had our ‘forever home’ in Limerick, but last year we took the plunge.” Her employer, Barnardos Ireland have helped her to make that change.

“I can’t describe the difference the move has made to our lives. Lockdown has shown how little we do need, but how much your kids need you. We are privileged that we have this opportunity.”

Crotty says: “The kids love the fact that we are around so much more and the ability to work remotely is phenomenal really.”

Over recent years, Kilkee has felt decimated by depopulation, especially in winter. This winter is different, however, “I am seeing so many faces and there is clearly something happening around.”

O’Sullivan said: “In the likes of coastal towns and villages like Kilkee, Lahinch and Liscannor you are talking about prices increases of up to 15 to 20 per cent.”

He states: “You have connectivity and the lifestyle that goes with it. People find it hard to resist. You are 30 minutes away from motorway infrastructure and you have national parkland and the open ocean right on your doorstep.”

Thirty-six miles north of Kilkee , businesswoman, Sinéad Ní Gháirbhith is getting ready to open a new Cheese Press outlet in Doolin in April. The shift to remote working has, she said, given her the confidence to do it.

Ní Gháirbhith has operated her Cheese Press shop on the main street in Ennistymon since 2017. Last year was her busiest year . She says: “It seems like every day there are more and more people moving down to Clare and they are falling in love with what life can be like in a small town as opposed to a big city.”

The Clare County Council digital hub is helping, too, she says: She says: “People working at the hub come up for a coffee and a chat. There are broadband issues in some people’s homes and also, working from home can be isolating, so the digital hub is definitely meeting a need.”

As part of its DigiClare initiative to encourage remote working in rural areas, the council has established digital hubs in Miltown Malbay, Feakle, Corofin, Kilrush, Kilkee and Carron in the Burren, offering socially distanced hotdesking and high-speed wifi.

Further hubs are planned for Ennis and Shannon and elsewhere, says council director of service, economic development and planning, Liam Conneally, who sees “significant opportunities” for the county ahead.

All of the company’s employees are remote workers and chief executive of HRLocker Adam Coleman says remote working can be transformative for Lahinch “but the people of Lahinch have to want it”.

The largest stumbling block is the lack of available housing, he says: “During [the pandemic] I have had at least two to three phone calls a week from people asking did I know of places to rent or buy in Lahinch.”

The lack of services in rural villages will hinder the possibilities, says Mr Murphy, so that needs to be overcome, along with problems with the National Planning Framework.

The benefits are clear, though, for those who have already made the move:

“My daughter, Clara is already looking forward to the idea of finishing her school day and running down to the beach for a swim. Moving back here has been the best decision we ever made,” says Paula Crotty.