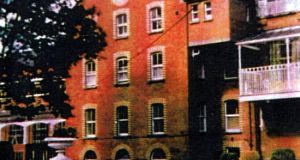 Children at the Pelletstown home on the Navan Road in Dublin were given an experimental vaccine against diphtheria in 1935. File photograph: Adoption Rights Alliance

The pharmaceutical corporation associated with vaccine trials described in the report of the Commission of Investigation into Mother and Baby Homes has said the practices described “make for difficult reading”.

“Our thoughts are with the families,” GlaxoSmithKline (GSK) said. The short statement issued by the corporation did not include an apology and a spokeswoman said it would not be commenting further.

The commission found there were 13 vaccination trials carried out in the 1922-1998 period covered by its terms of reference, seven of which were carried out in institutions it investigated.

Most of the seven trials did not comply with the regulatory and ethical standards of the time, and there was no evidence that the consent of the children’s mothers or guardians was sought.

“There is no evidence of injury to the children involved as a result of the vaccines,” the commission found.

The trials all involved the Wellcome Foundation or Glaxo Laboratories, both of which are now part of GSK, and took place in the period 1935-1973.

The commission also reported on two milk trials that were conducted in Pelletstown and Bessborough in 1968-1969, with children being fed with non-commercial infant milk products on behalf of Glaxo Laboratories, with some children suffering adverse reactions.

The earliest of the seven vaccine trials was in 1935, when children at Pelletstown were given an experimental vaccine against diphtheria, then one of the deadliest of childhood diseases.

The commission found the fact that the import of the vaccine was authorised by the Dublin public health authorities suggests it was in compliance with the regulatory framework of the time.

The commission said it was “abundantly clear” that a Wellcome Laboratories trial of a quadruple vaccine (polio, diphtheris, tetanus and pertussis) in 1960 and 1961 did not comply with the regulatory and ethical standards of the time.

The requirement to get consent for vaccine trials was well known and respected in the UK by this time, but there was no evidence that the mothers or guardians of the children in the Irish homes had signed consent forms.

A 1964 measles vaccine trial at Sean Ross was not in compliance with regulatory or ethical standards, the commission found.

Measles vaccine trials conducted in the Republic were undertaken on different terms from those in the UK.

In 1964-65, Prof Patrick Meenan and Dr Irene Hillery, of the Department of Medical Microbiology, UCD (who also were involved with the 1960-61 trial referred to above), conducted a measles vaccine trial for Glaxo Laboratories that the commission said was likely to have involved children in Pelletstown and Bessborough.

Nothing is known about the consents, if any, that were sought or obtained, it said.

Another trial involving Pelletstown and Bessborough took place in 1965 that the commission found did not comply with the standards of the time. A 1968 trial in Pelletstown was found to have the same failings.

A 1973 trial on behalf of Wellcome involved 20 children at Pelletstown, including two who had Down syndrome. Seven had been admitted to the home unaccompanied, and the mothers of the others had discharged themselves. Seven of the mothers had psychiatric disorders, and one was 15 years old.