Covid-19 restrictions result in 24,000 people waiting for application to be processed 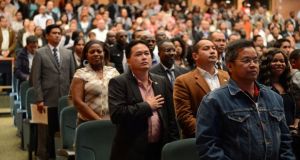 About 4,000 applicants for Irish citizenship, whose applications have been significantly delayed during the Covid-19 pandemic, are expected to be naturalised by the end of March under a new temporary process, the Department of Justice has said.

Last year’s decision to suspend in-person Irish citizenship ceremonies because of Covid-19 restrictions has resulted in a large backlog of applications with more than 24,000 people currently waiting for the process to be completed.

The department announced on Monday that 4,000 of those who are “ceremony ready” or in the “final processing stages” would be able to complete the naturalisation process before the end of March by signing a “statutory declaration of loyalty” rather than attending a citizenship ceremony.

Waiting for the large, in-person citizenship ceremonies to reconvene before restarting the naturalisation process is “not an option as many applicants would have their opportunity to be made Irish citizens postponed for an indefinite period of time through no fault of their own,” said the department.

Under the temporary system, qualifying applicants will be asked to complete a statutory declaration which is sent via email from the Department of Justice’s citizenship division. The applicant must bring the document to one of a list of designated officials who will witness their signing of the declaration. This document must then be sent back to the Department of Justice with the appropriate fee and any other requested documentation, a statement from the department said.

Minister for Justice Helen McEntee welcomed the introduction of the new citizenship arrangements and noted that a “significant number of healthcare and other frontline workers who have made extraordinary contributions during the pandemic” could benefit from the new temporary arrangements.

Dr Mohsin Kamal, a registrar in infectious diseases at Children’s Health Ireland Crumlin, said that the group was not looking for a change in the rules and that those who had requested that the process be sped up already met all requirements for citizenship.

“We’re just asking that you process our applications faster,” said Dr Kamal. “This has been a very tough year, not just for immigrant workers but very everyone. If the Government did this it would boost our confidence and our morale. It would show an appreciation for the work we’re doing. This should just happen, we shouldn’t need to push for this.”

A department spokesman responded to the call saying there were “no provisions to apply different criteria” to different citizenship applicants based on a person’s line of work and that “appropriate procedures” must be kept in place to “preserve the integrity” of the naturalisation process. All applications were “processed and assessed individually in accordance with legislation”, he said.

Data released to The Irish Times before Christmas revealed more than 5,300 people had been waiting longer than two years for their citizenship application to be processed while another 3,202 people have been waiting between 18 and 24 months and 4,677 were waiting 12-18 months. The Government’s immigration website states that a “straightforward application” for Irish citizenship should take 12 months to process.

Speaking on Monday, Ms McEntee also commended the launch of the citizenship website’s new online chat system called Tara which was introduced in December and provides users with instant responses to frequently asked questions and “mimics real-time text or message exchanges with a member of staff”. ETax-clearance for citizenship applications has also been introduced as part of the digitalisation of the naturalisation process while online payments are being rolled out to adult applications on a phased basis, she said.