Dublin City Council calls for €4,000 fine for each day of offence in overhaul of laws 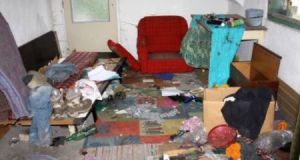 Currently, the council can only serve a landlord found to be in breach of standards with an “improvement notice” to take remedial action, followed by a prohibition notice barring them from reletting the property if the improvement works are not carried out. File photograph: iStockPhoto

Fines of up to €1 million and jail terms of up to two years should be introduced for landlords convicted of running dangerously overcrowded properties, Dublin City Council has said.

In a submission to the Department of Housing, the local authority said there have been cases where council inspectors were unable to tackle overcrowded rental housing due to gaps in existing legislation.

The unpublished submission from the council, which was sent this week to the Department of Housing secretary general John McCarthy by Brendan Kenny, the council’s deputy chief executive and head of housing services, calls for a major overhaul of current legislation.

It urges the Government to bring in fines of up to €1 million for landlords convicted of running overcrowded properties, and a €4,000 fine for each day the offence is continued after conviction.

At present, local authority inspectors can only deal with overcrowding under fire safety regulations. The council warned there have been cases of tenants living in conditions “causing risk” to their safety, where a fire hazard is “not the dominant issue.”

The submission calls for urgent amendments to legislation, including broadening the definition of overcrowding to allow council inspectors decide if the number of tenants in a property is unsafe. Legislation on overcrowding dates back to the 1966 Housing Act, and is “totally outdated”, according to Mr Kenny.

The council said the department should include overcrowding as a breach of minimum rental standards, which were updated last year. Provisions to include overcrowding in several other pieces of legislation are needed to give local authorities “effective powers to address urgent situations”, the submission said.

Currently, the council can only serve a landlord found to be in breach of standards with an “improvement notice” to take remedial action, followed by a prohibition notice barring them from reletting the property if the improvement works are not carried out.

The local authority currently relies on Dublin Fire Brigade to seek an order from the courts shutting down a property if there is a potential risk to tenants’ lives. The council asked the department to give local authorities the power to apply to the Circuit Court or High Court to shut down overcrowded properties, and to make it an offence for landlords to ignore improvement notices. The Minister for Housing Eoghan Murphy is “considering the proposal”, a spokesman confirmed.

Sinn Féin urged to take action over Stanley’s ‘glorification’ of IRA massacre 10:22
Some 5,300 people waiting over two years for Irish citizenship application to be processed 10:09
Man (30s) dies after being hit by car on M50 on Sunday night 08:43
Exiting Level 5: What will be allowed from December 1st? 08:26
Role of ‘survivor cannibalism’ during Great Famine detailed in new TV documentary 07:20