Khaled's story: 'Direct Provision is like living in a jail'

Khaled Azrag came to Ireland in 2008, fleeing the war torn Darfur in Sudan. Now he runs his own fitness studio in Cork. Video: The Detail 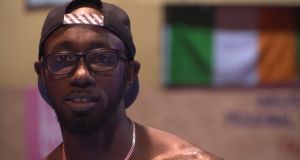 Khaled Azrag: it took almost six years in the Direct Provision system for the Sudanese national to secure asylum in Ireland

For Khaled Azrag, leaving his village in Darfur in December 2008 was not a matter of choice. For five years he witnessed the war between government and rebel forces tear his country and its people apart.

“When I arrived here it felt such a big relief. I felt ‘I’m fine, I’m safe’. All I knew was that I was leaving my country; I did not know what lay ahead for me,” Khaled says.

For the Sudanese national, however, it would take almost six years in the Direct Provision system to secure asylum in Ireland. His application was refused at first instance, when assessed by the Government’s international protection office, and was also rejected when considered by an appeals tribunal.

“I never thought I’d be waiting five to six years in the system – I thought I would be have been able to work. But that wasn’t the case.

“Direct Provision is like living in a jail. The process takes too long. There is nothing to do. There are too many restrictions… It makes life very difficult, very stressful.”

It was only when he took his case to the High Court that he was granted refugee status.

“I spoke to the judge myself and they believed my story. I think that made a difference. Nobody else can tell your story – only you can.”

Today, the 35-year-old is happily settled and working as a fitness instructor in Cork city. He is hoping that his son, whom he hasn’t seen since for nine years, will be able to join him under the family reunification programme.

Khaled is one of almost 16,000 people who sought asylum in Ireland between 2008 and 2016. He is also among the almost nine in 10 applicants refused asylum at first instance during this period, according to an analysis carried out by Belfast-based website The Detail.

The special investigation, supported by the Mary Raftery Journalism Fund and Tony Ryan Trust, examined the European Commission’s database, Eurostat, to reveal that Ireland had the second-lowest rate of granting asylum (13 per cent) across the EU and compared poorly to the EU average of 44 per cent between 2008 and 2016.

Asylum grant or recognition rates are calculated based on the grant or refusal of asylum at first instance when applications are decided by the Government’s international protection office. The Eurostat database does not indicate how many applicants, such as Khaled, go on to secure asylum following judicial review proceedings in the High Court or Supreme Court.

Eurostat data shows that Irish authorities granted asylum to 1,990 applicants at first instance between 2008 and 2016. The majority were granted refugee status (70 per cent) because of a serious threat to their life or freedom, as defined under the Geneva Convention. The remaining 30 per cent were granted subsidiary protection because of a risk of serious harm if they were returned home.

While yearly asylum grant rates show some improvement since 2014, Ireland’s more recent rate remains significantly lower than the EU average – in 2016 the EU average rose to 61 per cent, Ireland stood at 23 per cent.

A spokesperson for the Department of Justice said: “Recognition rates for asylum applications vary significantly between countries. For countries which are recognised conflict zones, such as Syria or Eritrea, rates tend to be much higher than for countries not experiencing such conflict, such as Albania or Georgia. Traditionally, Ireland has had much higher numbers of people from the latter category, leading to lower overall recognition rates.”

The spokesperson added: “In Ireland the five leading applicant countries for 2017 were Georgia, Albania, Pakistan, Nigeria and Zimbabwe which are not acknowledged conflict zones with high grant rates.”

Chief executive of the Irish Refugee Council Nick Henderson said: “Although this rate has increased over the years, Ireland still lags far behind its European neighbours, despite the fact that applicants come from similar countries of origin.”

The Irish Immigrant Support Centre, NASC, said Ireland’s asylum rejection rate was “very worrying” and stressed that country of origin should not influence asylum decisions, which should be assessed on an individual basis.

The Irish Human Rights and Equality Commission said that while acceptance rates were improving greater resources are required to deal with a backlog of asylum applications and to improve decision-making.

A spokesperson for the commission said: “The new single application procedure under the 2015 Act needs to be adequately resourced with highly trained personnel to address the legacy backlog and to ensure fair and high-quality decision-making, having regard to the high rate of refusals at the first instance historically seen in Ireland.”