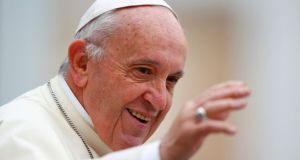 Pope Frances has been invited to attend the women’s conference on March 8th.

Pope Francis has been invited to attend the ‘Why Women Matter’ conference in Rome next month at which former President of Ireland Mary McAleese will be opening speaker.

She was barred from participating in the Voices of Faith conference to mark International Women’s Day when it was scheduled to take place at the Vatican, as it had been since 2014. It was then moved to the Aula of the Jesuit Curia in Rome.

In a letter to Pope Francis, director of Voices of Faith, Chantal Goetz, explained that the conference was “an annual global day celebrating the social, economic, cultural and political achievements of women. Voices of Faith warmly invite you to come and listen to young Catholic women’s voices on this day, Thursday March 8.”

She pointed out that “Voices of Faith is comprised of Catholic women from around the world passionate about creating a prophetic Catholic Church where women’s voices count, participate and lead on equal footing with men.

“This year, through our International Women’s Day event we are bringing especially young Catholic leaders from across the globe to Rome to share their stories, hopes and dreams for the future of our Church,” she said

Recalling how on his recent visit to Chile, Pope Francis said “that the voices of young people arrive often ‘very filtered’ to Rome” she said Voices of Faith was “bringing together Catholic women leaders to the door steps of the Vatican on International Women’s Day since 2014.

“During these years, some cardinals of the Roman Curia have been privately encouraging us, but none have ever come publicly to our event. We hope and pray that 2018 will be the year this changes.”

She suggested that “perhaps, like in many other areas, it will take your example to overcome this out-dated fear of women’s voices .” She, “humbly, asked for “your presence, to listen to our voices as an honoured guest. Listen to our stories, our struggles, our hopes for a more just and equal world fuelled by a prophetic faith.”

A promotional video for the conference has called for gender equality in the Catholic Church. “Women are raising their voices and are being heard. The culture that endorses their silence is being eroded. Silence is no longer an option. The time for change is now,” it says.

It asks whether the Catholic Church will become a relic. “Despite being made up by a great diversity of people from many walks of life the church is led by the experiences of a very narrow group. It is led by men.”

Women, it says, were being “systematically overlooked for roles in the Catholic church that they are qualified for simply because of their gender.”

Besides Mrs McAleese others speakers at the conference will include Ssenfuka Joanita Warry, a Catholic lesbian who campaigns for LGBT rights in Uganda and also barred from speaking at the Vatican; Zuzanna Radzik, an outspoken Polish theologian, and Joana Gomes, project director for Jesuit Refugee Services in Chad.