Pope accused of being ‘deliberately deceptive’ over Chilean abuse case 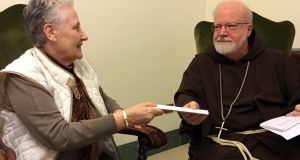 Marie Collins, a former member of the Pope’s sex-abuse commission, hands a letter to Cardinal Seán O’Malley detailing the abuse of Juan Carlos Cruz and a cover-up by Chilean church authorities, at the Domus Santa Marta on April 12th, 2015. Photograph: Catherine Bonnet via AP

Pope Francis has been accused of “inexcusable dysfunction at best and wilful deception at worst” following reports on Monday that he received a victim’s letter in 2015 which detailed how a priest sexually abused him and how this was ignored by Chilean clergy.

It contradicted the Pope’s insistence on a recent visit to Chile that no victims had come forward to denounce the cover up in relation to the accused priest Fr Fernando Karadima. He said he had never heard of any victims’ complaints against Bishop Juan Barros, accused of witnessing the abuse by Fr Karadima.

“The most charitable interpretation is that Pope Francis is guilty of either forgetfulness or dysfunction,” said Anne Barrett Doyle of the US -based BishopAccountability.org

She found either “implausible, given the Pope’s demonstrated interest in directly managing the scandal around Barros.” The more likely explanation was that the Pope “was being deliberately deceptive in Chile ...when he said he had seen no evidence of Barros’ complicity.”

This latest news was “evidence that the cover-up by the Catholic church continues and that it still begins at the top,” she said.

The Irish Times has also obtained a copy of the letter given to Cardinal O’Malley by abuse survivor Marie Collins, then a member of the Vatican’s Commission for the Protection of Minors.

Ms Collins has also released a photograph of the handing over of the letter which she has made public in the wake of Francis’s claim that he had never heard of any victims’ complaints against Bishop Barros over his handling of the case of Fr Karadima.

The scandal erupted last month when Pope Francis’ trip to South America was marred by protests over his vigorous defence of Bishop Barros, who is accused of witnessing and ignoring the abuse by Fr Karadima. During the trip, the Pope dismissed accusations against Bishop Barros as “slander”.

On the plane home he told a reporter: “You, in all good will, tell me that there are victims, but I haven’t seen any, because they haven’t come forward.”

Marie Collins recalled that “when we gave him (O’Malley) the letter for the Pope, he assured us he would give it to the Pope and speak of the concerns. And at a later date, he assured us that that had been done.”

She told The Irish Times the photograph was taken by another Commission member to assure the victims in Chile that the letter had been handed over to Cardinal O’Malley, president of the Commission for the Protection of Minors, for Pope Francis.

Pope Francis has designated Friday February 16th as Day of Prayer for Survivors and Victims of sexual abuse. On the first Friday in Lent, it will be marked in Irish dioceses and parishes.

Meanwhile the papal nuncio to Ireland, Nigerian-born Archbishop Jude Okolo, has advised a gathering of priests and nuns that the Church needed “radical persons.”

However, “such prophetical voices have to be exercised with respect, prudence and with good intentions. No one unclothes his dad in the public place, as my people say, in my country; no one reproves his parents in public,” he said.