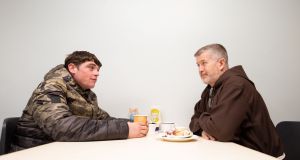 Marcus Coster (23), who has been in and out of homelessness since he was 15, says he has “basically no contact at all” with his family and friends due to the lack of a mobile phone.

Coster, originally from Bray, Co Wicklow, has been staying in emergency accommodation in Dublin for the last number of months and says each night he is left “sitting up, looking at the four walls”.

Having previously struggled with alcohol and drug addiction, he is planning to purchase a mobile phone and make use of a new data-sharing initiative created specifically for the homeless community.

An Post is donating 18,000GB of data across 2,000 Sim cards to Dublin Simon Community, Focus Ireland, the Peter McVerry Trust, St Vincent de Paul and Merchants Quay Ireland to distribute to their clients.

The initiative, the Shared Network, which was launched on Tuesday, is available to people who are homeless or living in temporary emergency accommodation across the country.

“It [the data] would help me do loads, keep in contact with family and friends. The biggest thing for me would be a support system because in the hostels it’s a community of drink and drugs basically,” says Coster.

“So if I go to an AA or NA [Narcotics Anonymous] meeting I could get people’s numbers and text them on WhatsApp. It’s just the support really and also the loneliness. It would be good to be able to watch a show on the phone, to just forget about your surroundings and be somewhere else for a bit.

“At the moment I’ve basically no contact at all with family or friends. I might bump into one or two of my mates if I’m lucky and then my family is in Bray. There’s no way of me getting in touch with them.”

Coster says the data will also be helpful in terms of finding appropriate support services.

“There are a lot of services in Dublin but they’re not the easiest to find, some of them. When I first came out here...I had to find everywhere the hard way. Whereas with Google Maps you can just look it up,” he adds.

“This will benefit a lot of homeless people, even in terms of mental health. It could be something as small as listening to a song, ringing someone if they need it, getting in touch on WhatsApp, just to know someone is there.”

Brother Seán Donohoe from the Capuchin Day Centre said the Shared Network will make an “enormous difference” to both the homeless community and service providers.

“Our numbers are growing, like everyone else’s are. Pressures are growing. To be able to be in contact with people is normality these days and homeless people are more isolated. So this is a way of alleviating some of the isolation that they experience,” he said.

The Shared Network also allows existing An Post customers to donate to the initiative when they top up. An Post has committed to add 1GB of data to their donation for every new customer that joins their mobile network until the end of 2020.