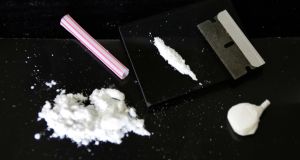 Former holders of the post of minister of state with responsibility for drugs have united to call on the Government to restore confidence in the national drug strategy.

Former holders of the post of minister of state with responsibility for drugs have united to call on the Government to restore confidence in the national drug strategy.

The former ministers want the Government to reaffirm the partnership and collaborative approach to the plan, which they say is in danger of collapsing.

In the foreword to the document, Taoiseach Leo Varadkar said the strategy “recognises the importance of supporting the participation of communities in key decision-making structures”.

He added that this would be of benefit because their experience and knowledge could inform the “development of solutions to solve problems related to substance misuse in their areas”.

However, the former ministers say the Government is taking the decision-making powers away from the community and voluntary sectors.

Speaking on behalf of the group, former minister of state for drugs Pat Rabbitte said the lack of collaboration poses a risk to the success of the scheme.

“Two years on from the launch of ‘reducing harm, supporting recovery’, we, as former ministers, are concerned and frustrated at the failure of Government to meet these commitments,” he said.

“At national, regional and local level, decision-making authority is being taken away from the strategy’s partnership structures and is reverting to the Department of Health and the HSE, who now make the key decisions centrally and without consultation with communities.”

Former Fianna Fáil minister Pat Carey said the role of the Drug and Alcohol Task Forces in delivering on the strategy at local and regional level is being undermined.

“New drugs appear regularly on the illicit market while familiar drugs such as cannabis are becoming more potent, and far too many people are living daily with the nightmare of drug-related intimidation and violence,” he said.

“The worst impact of drug-related harms continues to be in the most disadvantaged communities that have the least resources to respond. Now, more than ever, we need our national drugs strategy to work.”

The statement calling on the Government to act on the issue was signed by all the former ministers of state who held the role between 1996 and 2016. This includes Pat Rabbitte, Chris Flood, Eoin Ryan, Noel Ahern, Pat Carey, John Curran, Róisín Shortall, Alex White and Senator Aodhán Ó Ríordáin. Fine Gael TD Catherine Byrne is the current office holder.