Galway’s Lonely Planet award: ‘I don’t see how we will cope’

Galway is struggling with capacity problems and homelessness. A new travel award will not help 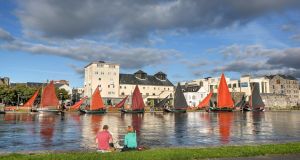 This week, it was announced that Galway had been named the fourth-best city in the world to visit in 2020 by Lonely Planet: an influential listing due to the international nature of the Lonely Planet brand. Galway came in after Salzburg, Washington, DC, and Cairo.

The city is also European Capital of Culture next year, and despite its well-documented administrative and leadership troubles, Galway 2020’s cultural programme will roll out across the city and county from February.

But how do people in Galway feel about the new designation, and what impact will it have?

The benefits of the listing

Patricia Philbin is the chief executive of Galway 2020, which will oversee 154 projects across the city and county – 65 of those in the city. Philbin believes Galway’s status as European Capital of Culture next year was a significant reason for the Lonely Planet listing, but “there has been 30 or 40 years [of] creative activity in Galway prior to any of this”.

What does she hope will be the outcome of the Lonely Planet listing?

“That it will raise the profile of Galway across the world and promote Galway. Lonely Planet is a huge platform for Galway to showcase itself, and the listing will have legacy effects post-2020, because it will still show up in searches, and people will still consider coming here.

“This is positive not just for Galway, but for the whole country,” she says. “You have to come into the country somewhere else to get to Galway, so it’s of benefit to the wider region.”

Philbin says other cities that have had the European Capital of Culture designation have seen a legacy of a 10-30 per cent increase in tourism, outside the additional visitor numbers in the year itself.

So what about the accommodation and traffic challenges next year that additional visitors will bring to a city already very popular with tourists?

“A lot of our programming is outside peak seasons,” she says. “We are working with the county so that people can stay out there, and park and ride within the region. There is accommodation capacity within the county,” she adds, before admitting: “Infrastructure is problematic.”

Galway is a small city already extremely popular with tourists, both domestic and international. Tourism Ireland doesn’t have a breakdown of figures for visitors to the city, but its total figures for last year for Galway city and county are 1.7 million international tourists and 1 million domestic visitors.

Can the city really cope with the additional numbers that will surely follow next year and beyond – due both to the Lonely Planet listing and its Capital of Culture designation?

“As a proud Galwegian, I am delighted the city has got this listing,” says Karen Golden, chief executive of Galway’s Simon Community. “But we have found in recent years that accommodation in the city is effectively upside down: in that we have so many tourists staying in homes and apartments through Airbnb, and other portals, while a great number of our citizens are staying in hostels, hotels and B&Bs.

“We are very concerned that Galway 2020 and the new designation from Lonely Planet may add to pressures in the housing sector next year.”

Golden reports that as of this week, there are 3,045 active Airbnbs across Galway city and county, with many of those in the city. Of the rentals, 61 per cent are rented out in their entirety – ie not hosted by a live-in owner. And of the 3,045 listings, 38 per cent of them are available full time, year-round for rental, indicating they are being run entirely for short-term lets.

“That is a very significant number of homes that are not available for local people because they are being used for Airbnb to host tourists,” Golden says.

Most of Galway Simon’s services are concentrated in the city. “We have accommodated 174 households in the year to date,” she says. “In July 2015 there were 119 people in emergency accommodation in Galway, Mayo and Roscommon. By July this year, the figure was 535 for the same area. The figure is growing steadily, and it is only going in one direction.”

Golden doesn’t know what’s ahead for the city next year. “We don’t really know how extra tourists are going to be managed but we are very nervous about it,” she says.

“In some cases that we are aware of, grown-up children with their own families are living back with their parents, There can be up to 15 people living in a three-bed semi-d and that is putting an enormous strain on mental health.”

Golden is well aware of the exceptional strain already placed on accommodation in Galway during high season in the summer. “Around the Galway Races and at peak tourist season, people in private emergency accommodation are asked to leave. A percentage of student accommodation has been used to facilitate these people, and our fear for 2020 is that the availability of those beds is going to be much reduced.”

“I’m disappointed Galway is only fourth on the list,” Dave Hickey, president of the Galway Chamber, declares. The Chamber represents more than 400 businesses, including hoteliers, across the city and county.

“We were well known as a cultural destination even before Galway 2020, with Druid, and Macnas and the Galway [International] Arts Festival. There are very few times during the year you don’t hear foreign accents on our streets, and if you speak to hotels, they will say that only November and January are quiet times for visitors,” he says.

What about the challenges of welcoming yet more tourists to a city where November and January are apparently currently the only quiet times?

As for traffic problems, Hickey says he would “urge locals and tourists to use public transport. For such a small city, it is a challenge to get around.”

Mary O’Malley is a poet and member of Aosdána who has lived in or near Galway for more than four decades.

“I wonder if Galway isn’t in danger of killing the goose that lays the golden eggs,” she says. “Galway has traded on being a city of the arts for a long time now. I feel uncomfortable at the arts being used as part of a giant marketing campaign to promote Galway. It’s a gorgeous city and I love it, but I don’t see how Galway will cope with all these extra people who are going to come.”

O’Malley considers that “a city owes its first loyalty to its inhabitants, its tourists second”. She points out that “the actual infrastructure of the city is heaving. I’d say it’s broken – the transport and the housing. The housing situation is critical; there isn’t enough housing for the people who live here.

“Last year is the first time I saw people sleeping on the street, all the way from Eyre Square up to Foster Street, where the coach station is. What kind of message does that send to people visiting the city? It’s visible homelessness, and I feel uncomfortable that these people are not being housed; that they don’t seem to be part of the story that Galway wants to put out about itself.”

It is the 15th year that Lonely Planet has published a Best in Travel list. The criteria for the selection of the best places to visit for the coming year are, according to a press statement, “not a heads-up on where travellers are going, but rather a means to express where travellers should consider visiting in the coming year”. The reasons, they say, may vary. “It could be that there is something special going on that year, that there’s been recent development and a lot of buzz around the place.”

The reasons, it says, may vary. “It could be that there is something special going on that year, that there’s been recent development and a lot of buzz around the place.”

The process of selection is lengthy. First, the company invites suggestions from more than 200 Lonely Planet writers, bloggers and employees. Following “brainstorming events” at offices around the world, Lonely Planet arrives at a longlist of more than 1,000 ideas. From this, a number of “travel geeks” draw up a shortlist, which is sent to five Lonely Planet writers. They come up with the final list.

“While it isn’t possible for the five members of our final judging panel to visit all of those destinations in their year of nomination ... the Galway entry was written by one of [Lonely Planet’s] Ireland experts, who had very recently spent significant time on the ground in Galway city updating our guidebook content,” says Nóirín Hegarty, vice-president of digital content at Lonely Planet.

What about the value to or impact on the places selected for the list? “We don’t do it with that in mind,” Hegarty says. “We don’t track what a selection does for a destination. But it will expose Galway to more international media attention than it would get otherwise, because Lonely Planet is a brand with integrity and authority.”

Does Hegarty think more tourists are good for a city already not short of them? “Our approach is to reward destinations that are, in our view, sustainable,” she says. “We think that travel done responsibly is a force for good.”