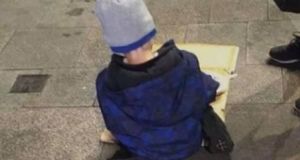 A photo of “Sam” (5) shown eating his dinner from a sheet of cardboard on a Dublin street this week in a case that was subsequently raised in the Dáil. Photograph: Homeless Street Cafe/Facebook

Homeless children are presenting at emergency accommodation hubs with underdeveloped swallow reflex and problems chewing solid food, believed to be associated with a prolonged diet of non-perishable puréed food, a charity has said.

The Limerick-based homeless service organisation Novas said it had noticed the problem occurring in children presenting at its “family hub” services, who had lived for prolonged periods in hotel rooms with no access to cooking facilities.

“In hotels, families have no access to cooking, refrigeration or [food] storage facilities, so they cannot cook or prepare lunches, and that’s really debilitating, and it is de-skilling parents and knocking their confidence,” said Una Burns, the charity’s head of policy and communications.

“We have children presenting in our hubs who have lived in hotels previously and they are struggling to chew and swallow, because mums and dads haven’t been able to prepare proper food when they’re living in hotels.

“The children are still on puréed food in pouches, at two and three years of age, because it doesn’t perish the same way fresh food does. So, they’re swallow reflexes haven’t developed.”

Other “basic developmental milestones are being missed” in children who had been living for long periods in emergency accommodation, she said.

As there was little space to move around in this type of accommodation, “children are finding it difficult to learn to crawl and learn to walk”.

These were “things that we wouldn’t associate with homelessness”, Ms Burns added.

She also spoke of the “emotional challenges” children faced by “having the insecurity and anxiety of not knowing where they are going to sleep from night to night”.

“There is no targeted mental-health interventions for children who are living in high-stress congregated settings – whether that’s a hub, or direct provision, or a domestic violence [shelter].”

At the launch of its annual report for 2018, Novas said it had supported, for the first time, more than 1,000 children who were homeless or at risk, as well as providing 110 tenancies nationwide.

“We want to try and develop a template that might be used nationally to support children in their mental health, in their physical development, and their ability to express the anxieties that they experience from these high-stress congregated settings,” she explained.

On Thursday, Tánaiste Simon Coveney told the Dáil he was “angry” that child homelessness was continuing, describing as unacceptable the sight of a five-year-old child eating his dinner from a sheet of cardboard on a Dublin street this week.

A photograph of the child, identified only as “Sam”, was posted on Facebook by charity group the Homeless Street Cafe which said the young boy had to eat his dinner while sitting on the footpath.