‘He was the warmest, kindest man,’ says charity worker of Timothy Hourihane (53) 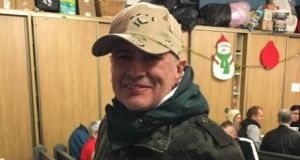 Timothy Hourihane had been a chef: ‘He served Elton John and Lionel Richie. He loved his food’

Gardaí in Cork have begun a murder investigation after a postmortem examination found a homeless man died from injuries sustained in an assault.

The deceased, named locally as separated father-of-one Timothy Hourihane (53), from Goat’s Path on the Sheep’s Head peninsula near Bantry, had been living in a tent in the Mardyke in Cork city.

Mr Hourihane, originally from Bantry in west Cork, was a talented chef and had battled alcohol addiction. He had worked in prestigious restaurants in Britain and had cooked for celebrities. He was interviewed for The Irish Times on Christmas Day 2017, at Penny Dinners charity on Hanover Street.

During the interview he spoke about having battled through periods of sobriety and relapses, and also about his struggle to find accommodation.

“When you sleep on the streets, you are lucky to wake up with your trainers still on. It has happened to me where I have woken up with one trainer missing. You have to laugh because you think, Why didn’t they take the two?” he said.

Christina Chalmers of the charity Helping Cork’s Homeless said she was lost for words when she heard about Mr Hourihane’s death.

“He was the warmest, kindest man. He never caused anyone any hassle. He was so kind to other homeless people. He was great fun,” she said.

She said his troubles really began close to a decade ago when he lost his partner, Michael, to cancer.

“He served Elton John and Lionel Richie. He loved his food,” Ms Chalmers said. “I want him to be remembered for who he was. He watched out for vulnerable homeless people. My family all loved him. We are devastated.”

Gardaí and emergency services were alerted at around 12.40am on Sunday when passers-by reported a tent on fire at a green area on the Mardyke across from the entrance to UCC. The injured man was taken by ambulance to Cork University Hospital, where he died a short time later.

“We believe there was some shouting – perhaps not during the incident itself but perhaps earlier – so anyone at all who has any information that can help us, including taxi drivers with dash cams, we would ask them to contact us.”

Gardaí said the man appeared to have suffered a severe beating but they have found no evidence to suggest any implements or weapons were used and believed he may have been kicked and punched repeatedly in the head.

Garda technical experts found no evidence of any accelerant such as petrol being used to burn the man’s tent, which they believe may have happened after he was assaulted by one or more assailants.

The green area, which is just off the Mardyke Walk, has become home to up 15 homeless people in recent months, with many living in tents pitched against walls or hedges or under trees.

Initially, gardaí thought the fatal assault may have been linked to another attack on a 40-year-old man availing of soup kitchen services on Patrick Street in Cork last month but they have since discounted any link.