Wanting more and more could yet destroy our planet 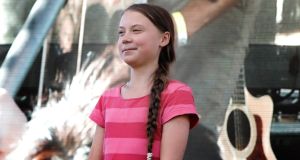 Greta Thunberg is right about our obsession with money and an expectation of unbounded economic growth. Photograph: Peter Foley/EPA

“We are in the beginning of a mass extinction and all you can talk about is money and fairy tales of eternal economic growth – how dare you!”

Stinging words from schoolgirl climate activist Greta Thunberg when she addressed a recent UN climate conference. She is right about our obsession with money and an expectation of unbounded economic growth, but any political party suggesting otherwise has little chance of success. The idea that we might change our lifestyle for the sake of the environment or lower our expectations in order to share wealth more equitably would not be a vote winner because politics is mostly about promising people what they want rather than what they need.

This is not new. St Paul was aware of the problem when he wrote to the Christians in Colossae (part of today’s Turkey) 2,000 years ago about people’s expectations. He used the Greek word Pleonexia which was a contemporary philosophical term for covetousness or avarice.

William Barclay describes pleonexia as an “accursed love of having”, which “will pursue its own interests with complete disregard for the rights of others, and even for the considerations of common humanity”. He labels it an aggressive vice that operates in three spheres of life. In the material sphere it involves “grasping at money and goods, regardless of honour and honesty”. In the ethical sphere it is “the ambition which tramples on others to gain something which is not properly meant for it”. In the moral sphere, it is “the unbridled lust which takes its pleasure where it has no right to take”. No wonder Greta Thunberg is angry.

In a radio address some time ago, Dr Justin Welby, Archbishop of Canterbury, suggested our obsession with material wealth can lead to a warped understanding of the value of others. “The degree to which mammon is enthroned in each of our lives is uncomfortably revealed by the degree to which we often disproportionally value the things we can readily measure. This can lead to a demeaning of people who do things without economic reward. Mammon brushes past them, spurning them as unimportant, little people.

The parent or family member who stays at home or refuses a promotion to be with a child with disabilities is not considered to contribute. Yet the sacrifice and care they demonstrate is extraordinary. A spouse who supports their partner at the cost of their own career is seen as second-rate, or lacking ambition. Thomas Jefferson said that material abundance without character is the surest way to destruction.

Tomorrow’s gospel reading reminds us of Zacchaeus, the chief tax collector who, because of his small stature, climbs up a tree to get a view of Jesus. He is not popular with the crowd because of his job but he is wealthy and powerful so why should he care.

His life is all about money and it brings him wealth but not a single friend. He is an example of the culture Anand Giridharadas had in mind when he wrote: “Money has transcended being currency to become our very culture, conquering our imaginations and infiltrating domains that had nothing to do with it.” Zacchaeus is impoverished by his prosperity and warped by complete immersion in this false culture. He is lonely, he is trapped: his life is reduced to counting money. Surrounded by riches, he’s poor.

When Jesus offers him the opportunity of release from “this hamster wheel of despair”, he does not hold back. The signs of transformation are dramatic and unprompted: suddenly he’s eager to give half of everything he owns away and to pay back anyone he has cheated four times the sum. A man who chased pennies is giving away pounds – reckless in his new-found freedom.

Pleonexia – wanting more and more – is a disease that can destroy individual lives, families, and even countries; it is a plague that has, in the course of human history, wiped out entire cultures. And as Greta Thunberg has forcefully pointed out it can even threaten the existence of an entire planet.