An ordinary bloke with many talents: Remembering Jer O’Leary

‘Will forever be remembered for his unstinting political activism’ - President Higgins 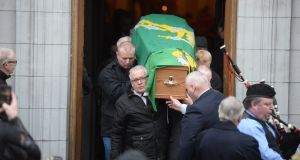 The remains of actor Jer O’Leary, being carried out of the Church of St. Agatha’s. Photograph: Dara Mac Dónaill / The Irish Times

Actor, activist, artist, raconteur, orator, and trade unionist Jer O’Leary (73), who died in Dublin on St Stephen’s Day, had a favourite quotation: “If you have not been involved in the passions of your time you have not lived.”

So his sister Margaret recalled at a crowded St Agatha’s church on North William Street on Thursday morning at the end of the funeral Mass. “Jer followed through on that belief and the presence of so many colleagues and friends here today is a testament to that,” she said.

“Our Jer was just an ordinary bloke, to whom nature gave many talents and those talents and his committment were made available to the benefit of all who asked,” she told the congregation.

Best know for his portrayal of trade unionist Jim Larkin, O’Leary appeared in 42 films, making his debut in Jim Sheridan’s My Left Foot. Other roles included the Neil Jordan film Michael Collins, where he played Thomas Clarke, and as the King of the Tinkers in Jim Sheridan’s The Field.

His film credits also included In the Name of the Father, Braveheart, This Must be the Place and the fantasy series Game of Thrones . A renowned balladeer, artist and a folklorist he was also a skilled tapestry banner maker which he made for trade union marches.

A committed trade unionist himself, he left school at 13, became a political activist and joined Official Sinn Féin before moving to the Communist Party. Over six feet tall, his first acting role on the Dublin stage was as Big Jim Larkin in The Non-Stop Connolly Show co-directed by Jim Sheridan, John Arden, and Margaretta D’Arcy in 1975.

He came to wider public prominence as Jim Larkin in James Plunkett’s The Risen People, directed by Jim and Peter Sheridan. In 1977 he appeared in Donald Taylor Black’s production of the Bertolt Brecht classic The Mother at the Project theatre on Dublin’s Essex St.

A tragedy had a major impact on the O’Leary family in 1998 when son Diarmuid (22) died in a fire in a Glasgow guesthouse just hours after he had watched his favourite team Glasgow Celtic win the Scottish premier League.

Jer O’Leary was born in Dublin’s Holles Street hospital,“which, I liked to point out to his annoyance, meant he was actually a southsider,” sister Margaret told the funeral attendance this morning. They, and two other siblings, were raised on Upper St Columba’s Rd in Drumcondra.

She was herself born “on the actual morning of Jim Larkin’s funeral . . . But as we know it turned out that it was Jer who absorbed Larkin’s spirit and persona and kept Jim’s name and achievements alive.”

Both he and she had been involved with the Official Republican Movement in the late 1960s “and this ran parallel until Jer moved on to the Communist Party.” His “politically related activities had led to him receiving a sentence of three years in Mountjoy. Naturally, our Da and Ma were devastated with the outcome.”

It became “a huge turning point” in his life and “lead indirectly to the commencement of his career as a Banner Artist.” He would later admit “how proud he was to see the Banners ‘on active service’ in many marches and demonstrations.”

However “the most important event in Jer’s life was that he had met his beloved Eithne just a short while before he had to commence the three year stretch. Depite all of this they persevered and were married soon after his release.”

They raised their three children in the North Strand but “in 1998 when their son was only 22 they were devastated when Diarmuid died in a guest house fire in Glasgow following his beloved Celtic.”

It took “a heavy toll on Eithne’s health at that time.” Then, “when Eithne herself became ill and died just over a year ago, Jer’s world collapsed . . . thus bringing us all to where we are today,” she said.

“All those who love and appreciate Irish art and theatre will have been immensely saddened by the news of the death of Jer O’Leary, activist, actor, orator. Known for his film and television work in a variety of roles and in particular, his seminal work with directors Jim Sheridan and Neil Jordan and his portrayal of trade union leader Jim Larkin, Jer O’Leary will forever be remembered for his unstinting political activism,” President Higgins said.

After the Mass, as the coffin was carried down the centre aisle of St Agatha’s for burial in Dardistown cemetery, a recording of the song ‘Streets of Laredo’ played softly in the background.