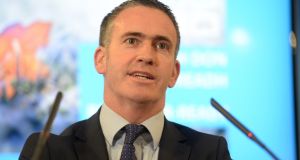 Damien English: “I’ve seen conditions in some sites in Galway, Cork and other places. [I am ]not happy whatsoever. They are disgraceful some of them and that’s being honest.” Photograph: Dara Mac Dónaill

Living conditions in some Traveller sites are “disgraceful” and “not conditions for families to be living in”, Minister of State for Traveller Housing, Damien English, has said.

He wants conditions to improve and will act on all forthcoming recommendations from an expert group looking at why local authorities are failing to deliver Traveller accommodation. Among these could be sanctions on councils.

A Housing Agency report, published in late 2017, found Traveller accommodation targets had not been fully met at any point since they were made mandatory on local authorities 20 years ago.

It found more than €55 million provided for Traveller housing remained unspent since 2000 and just 6,394 of the 9,390 – or 68 per cent – units of Traveller accommodation promised had been provided. Anti-Traveller prejudice at local authority level might be hampering delivery, it added.

On foot of that report an expert group, chaired by solicitor, Traveller and expert in housing rights David Joyce, is to recommend to Government how to tackle the failure among most local authorities t deliver on their Traveller accommodation plans.

Among the issues the group has said it will look at is whether councils failing to spend Traveller accommodation budgets should face sanctions, such as having other parts of their annual budgets withheld. It is expected to report in March.

“I have been very clear to the expert group,” Mr English told The Irish Times. “I’ve said clearly, ‘Bring back your recommendations’ and yes, I will act on them. As a Department our remit is to provide accommodation. There are people with nowhere, on a temporary site or on an unauthorised site or who are waiting for a house, so we want more activity [in providing Traveller accommodation].”

The most recent data, published by the Department in July 2018, showed the number of Traveller households living by the side of the road or in overcrowded conditions had increased by 66 per cent in five years.

While in 2013 there were 1,024 Traveller households in overcrowded, dangerous or inadequate housing this had increased to 1,700 in 2017. Families living in these conditions account for 15 per cent of the total Traveller population.

Minister English has been visiting sites across the State in the past year.

“You wouldn’t be happy with what we’ve seen. I’ve seen conditions in some sites in Galway, Cork and other places. [I am ]not happy whatsoever. They are disgraceful some of them and that’s being honest. Some of them are very poor . . . not conditions for families to be living in.”

Asked why some local authorities were not spending their Traveller accommodation budgets he said it appeared problems lay in the planning process. He is not keen however to change this process.

All proposed social housing, including Traveller housing, must go through a planning process set out in Part 8 of the Planning and Development Act. Under this local residents and businesses, and councillors, can object.

This has to be allowed continue, said the Minister, putting him at odds with many who say Traveller accommodation should be removed from the Part 8 process to enable councils press ahead with plans despite local opposition.

“I will see what the expert group brings back but in general I think the best way is to engage with existing communities in the planning system.”

He believes communities can be convinced to accept Traveller sites if assurances are given they will be well maintained and managed.

“So I would always say, ‘try and look at the positives’, if we could manage to publicise good developments . . . I’ve seen some very well-run and some very poorly-run sites.”