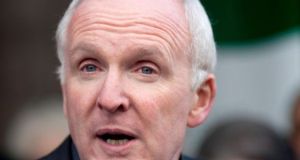 A Catholic bishop has said this year was a time that many in the church felt “almost overwhelmed by what has been the most striking moment to date for our country in sweeping in what is perceived to be a liberal agenda”.

Bishop of Limerick Brendan Leahy was referring to the passing of the referendum on repealing the eighth amendment in May.

“Or, more precisely, the referendum to remove the fundamental right to life of the unborn,” he said. “We are now about to begin the taking of those lives indiscriminately. The right to choose superseding the right to life.”

In an end-of-year reflection, Bishop Leahy acknowledged that a majority voted to repeal the amendment but he said it was to be hoped “that no one, or at least very few, willingly voted primarily for the abolition of the life of the unborn child in the womb”.

He found it “very disheartening that proposed amendments seeking to provide women with information and to prohibit abortion on the grounds of sex, race or disability were given short shrift in the Dáil”.

It was “outrageous to think that it would even be contemplated that doctors could be forced to perform or contribute to an abortion against their will. Forcing them not to choose life would be a most inglorious watermark for this country,” he said.

He appealed to all public representatives “to keep their focus wide. They represent not only those in favour of abortion but also the many who find its introduction deeply distressing.” He also urged “those in crisis pregnancies to choose life”.

“On the eve of the introduction of abortion services into Ireland, let’s look one another in the eye, and regardless of how we voted, promise we’ll be promoters of a culture of life.”