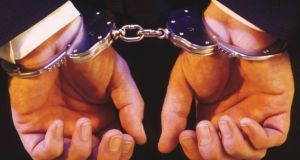 Some 371 Irish people were arrested abroad in 2018, up from 316 arrests in the whole of the previous year. Photograph: Getty Images

The number of Irish people arrested abroad last year rose by almost a fifth from 2017, according to final end-of-year figures released by the Department of Foreign Affairs (DFA).

According to the Irish Council for Prisoners Overseas, a support group for inmates and their families, there are currently more than 1,100 Irish people in prisons abroad, most of them in the United Kingdom.

Kyle O’Sullivan, former Irish ambassador to Indonesia who leads the consular directorate, says most arrests made overseas in 2018 were for minor offences and often connected to immigration issues but a small number of people are arrested each year for serious crimes.

A total of 2,343 Irish citizens received consular assistance from Irish embassies, consulate-generals and honorary consuls throughout 2018, according to updated figures.

Support was provided in 74 cases of deportation, down from 90 cases in 2017, while the number of medical support cases reached 335, slightly below last year’s 343 cases.

Some 103 Irish people were reported missing abroad, a slight increase on the 96 cases in 2017. Some 143 Irish people reported being victims of crime abroad compared with a total of 151 people in 2017.

In 2018, a number of Irish people required assistance after becoming caught up in the wildfires in California, Greece and Portugal, earthquakes in Indonesia, and terrorist attacks in Strasbourg and Toronto.

Minister for Foreign Affairs Simon Coveney recommended all Irish travellers consult the DFA’s travel advice before going abroad and take out comprehensive travel insurance, noting that while most journeys go smoothly, “the 2018 statistics illustrate what can happen when things go wrong”.

Research by the department has found only 58 per cent of Irish citizens took out travel insurance for their last trip abroad.

There are more than 80 Irish embassies and consuls around the world in addition to 94 honorary consuls who are not diplomats but can provide assistance to Irish citizens. Since May 2018, as part of the EU consular protection directive, Irish citizens can seek assistance from any other EU member state embassy or consular in a country when there is no Irish representation.