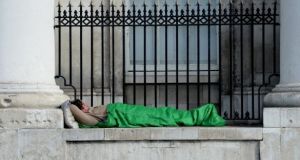 A homeless man sleeps outside the Custom House. Eileen Gleeson, director of the Dublin Region Homeless Executive, said while many loved to help the homeless at Christmas, far fewer wanted homeless services near them all year around. File photograph: Cyril Byrne

Homeless people are “like the puppy at Christmas”, the director of Dublin’s homeless services has said.

Eileen Gleeson, director of the Dublin Region Homeless Executive (DRHE), said while many loved to help the homeless at Christmas, far fewer wanted homeless services near them all year around. And she said the media and some homeless charities, in their portrayal of homeless people, did not “help”.

“I hate the perception of a homeless person. It melts my head,” she said. “I particularly get annoyed with the fundraising that goes on – the picture of the man with the beard and the cup and the ‘Text such and such a number to donate’. It stigmatises. . . We shouldn’t do that to each other. It’s worse at Christmas.”

The imagery contributed to communities’ fears when homeless services in an area were planned, she said.

“When you think about the problems we have putting in facilities, the nimbysim, the attacks we come under because there is a perception of the homeless as ‘other’. We are not helping it by: ‘Text for soup’. . . There’s a perception of this terrible person and they [homeless people] are not terrible. The problem with the media bit is that it’s making it very difficult for us to deliver the services.

“It’s like the puppy at Christmas. Everyone wants to help them at Christmas but they really don’t want them beside them after that, despite the fact most of what we provide now is supported accommodation, 24-hours beds. . . so they are not queuing up outside.

“But when you mention putting in a homeless service that’s exactly what goes into somebody’s brain and we end up in the High Court trying to force things through.”

In October last year residents in the Liberties area of Dublin mounted a High Court action against DRHE plans to convert Carman’s Hall, a building in Francis Street, to a long-term emergency accommodation for rough sleepers. It had been in use since December 2016 and was then to be temporary. The residents wanted the hall, owned by the Dublin Catholic diocese, returned to use as a community centre.

In December 2017 the High Court put a stay on the order following discussions between residents and the council, allowing it to be used for the homeless for a further five months.