Christmas in direct provision: ‘This year what I’m longing for is my freedom’

The festive season can be a difficult time for the 5,997 people living in direct provision 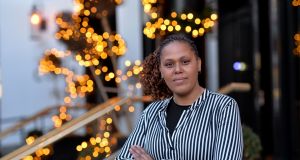 This week Mavis Ramazani and her daughter spent their third Christmas in direct provision. In previous years they visited friends outside the centre on December 25th but this year Ramazani decided to stay home. They ate Christmas dinner in the canteen in Hatch Hall where they live and then took a stroll around the empty streets of Dublin’s city centre. Her 7-year-old was overjoyed when Santa stopped by last Friday to drop off some gifts for children at the centre but since then the centre has been quiet.

“For me it’s a very tough period because you can’t travel and be with your loved ones. It’s lonely and hard but I try my best for my daughter so we can have as normal a Christmas as possible. We are Muslims but I let her enjoy the  . . . [idea] of Santa. It keeps her happy and makes her feel normal. I let her live with that magic.”

It makes you realise what you’re missing out on – family, a home and a meal of your own

Ramazani received many invitations to visit friends over Christmas but finds it difficult to step temporarily inside people’s homes during the festive season only to return to the direct provision centre a few hours later. “It makes you realise what you’re missing out on – family, a home and a meal of your own. In Hatch Hall we can’t cook for ourselves, we can’t get that pleasure of eating our native food on Christmas Day and we don’t have the money to eat out.”

Just over 200km away, in the town of Ballyhaunis, Co Mayo, Owodunni Mutapha and her three children are spending their fourth Christmas in the Old Convent direct provision centre. Fed up with lack of Christmas activities for children in the centre, Mutapha decided to organise a music and dance display last week. “I was in Dublin a few weeks ago to renew my card and I could feel the festive period in the air. You don’t see that down here and I decided we needed to create some fun.

“I went around all the parents in the convent and asked would they like their kids to be part of the show. On Friday we put on a dance and music show and a DJ volunteered to come for the afternoon. We invited people from the local community to come too.”

Spending Christmas in Ireland feels different to the festive celebrations in her home country of Nigeria, says Mutapha. “You’d spend time with family and friends and people travel far and wide to celebrate the festivities with you. That feeling of togetherness and love and sharing those times together, it’s not the same here. You’re all by yourself.”

Mabel Chah, who spent two years living in direct provision in Sligo, also organised a Christmas event for asylum seekers this year. A founding member of Global Kitchen community organisation, Chah came together with a group of fellow-Cameroonians to arrange for residents of the Globe House centre to gather in the local community centre for Christmas dinner.

“I remember my first Christmas in this country; it would either make or destroy you. I knew no one and, coming from the kind of Christmas we had in Africa, it was difficult. I sat in my room and looked outside and there wasn’t one car going by. There was such a build-up to the day and then nothing happened. I for one would have been alone again this Christmas, and in direct provision it’s even worse for people. So a few of us said, let’s do something this year instead of people staying home alone.”

On the advice of the chairperson of the local community centre, Chah opened the celebrations to the general public. “We thought it was just people in direct provision who would be on their own but she reminded us that people in the Irish community might be alone too.”

Back on the east coast, Deon Griffith, his partner Lauren Lilford and their one-year-old daughter Lily Bethany, celebrated Christmas at a dinner organised by the local community in the town’s church. The family recently moved into the newly opened direct provision centre in Wicklow town along with about 70 other asylum seekers.

Griffith, who is originally from Zimbabwe, says he’s had a generally positive experience in the asylum system since arriving in Ireland just over a year ago. “The food isn’t the best in the centres but you get three decent meals a day. I find if you work with the system it’s grand, but if you have an attitude of entitlement they won’t help you. There’s no real reason to complain – you’ve got hot water and clean sheets.”

The couple say the Wicklow community have been very welcoming to the new arrivals who moved into the former Grand Hotel a few weeks ago. “The residents have been amazing and the hotel staff are great – we’re really being taken care of. We’ve got food and a warm place to sleep.”

Any direct provision centres that wanted to organise “special Christmas activities” this year had to do so independently, according to a spokesman for the Department of Justice who added that residents “also celebrate religious festivals according to their faith throughout the year”.

Asked whether residents received any additional financial support over Christmas, a statement from the Department of Employment Affairs and Social Protection, which oversees the weekly payment to asylum seekers, confirmed that residents who had been receiving the allowance for 15 months or longer were entitled to a Christmas bonus. For a family of one adult and two children this equates to a payment of €64.80.

Adults living in direct provision currently receive a weekly allowance of €21.60 while children also receive the same amount. From March 25th, 2019, this weekly payment is set to rise to €38.30 for adults and €29.80 for children.

There was a total of 5,997 people living in direct provision by December 2018.

Back in Dublin, Ramazani hopes that this will be her last Christmas in direct provision. “This year what I’m longing for is my freedom. All this waiting takes a real mental toll and I didn’t feel like being around people this Christmas. This pain only goes away when you’re documented. The limbo of waiting eats up even the nicest of occasions like Christmas. It doesn’t make you feel like celebrating. Freedom means so much – you only realise that when it’s taken away from you.”

Coronavirus: Why are men twice as likely to die as women? 02:09
Coronavirus virtual funerals: 'It’s not the same... very difficult to process' 02:05
Beyond the call of duty: Community gardaí help woman move her mother to safety 02:03
A doctor writes: Where are all the non-Covid-19 patients? 02:02
‘No point’ in coalition with FG-FF without two smaller groupings 02:00