Searching for salmon using the bar code of life 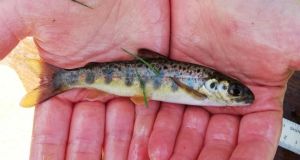 When Siobhán Atkinson gets into the river Dinin in Co Kilkenny in her waders, she’s on the hunt for wild salmon – the king of fish and a prized specimen for many anglers.

But Atkinson isn’t casting a fishing rod, and she’s not carrying any fishing flies either. Her only tool is a two-litre sterilised water bottle, whose contents will later reveal whether she has found her quarry.

Overfishing, climate change and sea-lice contamination from farmed salmon have all impacted on wild salmon numbers, which have plummeted since the 1980s. However the quality of their river habitat is also an issue. The Atlantic salmon’s “homeplace” is the river where it is born and spends its first years of life. For salmon to reproduce successfully, it’s critical that they can reach those streams and tributaries when they return from the sea some years later.

Atkinson’s study is part of a University College Dublin research project to find out what man-made barriers, such as weirs, bridge aprons, culverts and fords, are preventing Atlantic salmon from reaching their spawning grounds.

When you survey an area and discover a barrier to migratory fish, you have to come up with a solution

The project, funded by the Environmental Protection Agency and the Atlantic Salmon Trust, uses environmental DNA analysis to detect the presence of salmon. Environmental DNA (eDNA) is the collective name for DNA molecules that are released from living or dead organisms and can be found freely in the environment, in this case river water. What Atkinson is searching for, with her plastic bottle, are tiny specks of DNA from blood, fish scales, mucous or faeces that will prove the presence or absence of salmon.

Sampling of eDNA has already been used in Ireland to detect the presence or absence of the endangered pearl mussel, as well as brown trout and sea lamprey, but this is the first time it has been used to detect salmon.

Up to now the standard method of establishing the presence of fish has been electrofishing. Inland Fisheries Ireland sections off a stretch of river, places electric probes on the riverbed and runs a current between them, temporarily stunning any fish that are there, which allows them to count and measure the fish. eDNA is less invasive and also less expensive, allowing more ground to be covered.

After Atkinson took her water samples they were filtered immediately on site. The eDNA collected on the filter was preserved, and extracted at a later stage back in the lab. As any fisherman will tell you, finding a salmon is like finding a needle in a haystack. But all species have DNA sequences that are unique to them. The CO1 gene is the bar code of life.

A critical element of the study was the design of the assay. Primers (gel like substances produced to order by bioscience companies) are designed so that they only bind to DNA sequences that are unique to a particular species, in this case Salmo salar.

A technique known as quantitative polymerase chain reaction (qPCR) was used to analyse the samples. Regular PCR, known as “molecular photocopying” is a technique used in molecular biology to amplify DNA fragments to obtain millions of copies of DNA. The addition of a fluorescent species-specific probe to the reaction allowed for quantitative results, so that sampling did not just detect the presence of salmon but also concentration levels.

The primers and probes for this assay were based on Atlantic salmon DNA sequences obtained from GenBank, a library which contains genetic sequences from organisms all over the world.

“Once designed on a computer, the primer and probe sequences were matched against sequences from other species in the library to verify that the sequences are specific to Atlantic salmon only,” says Atkinson. “When the primers and probes were manufactured they were then tested on DNA extracted from salmon tissue to make sure they work.”

Atkinson sampled the water above and below certain barriers on seven different Irish rivers, at two sites on the Dinin which flows into the Nore, another Nore tributary the Delour, the Burren river in Carlow, the Dalligan near Dungarvan in Co Waterford, the Duag and the Multeen, both tributaries of the Suir and the Browns Beck Brook near Donard in Co Wicklow in the headwaters of the Slaney catchment.

“When we found salmon DNA on both sides of the barrier, then that tells you that the fish are able to get up into higher water,” says Atkinson. “But at some sites the concentration was much higher below the barrier.”

For example, results suggested that the bridge apron on the Dinin River at Crettyard is an impassable barrier for salmon, and that the weir in Castlecomer is also something of a barrier, as eDNA concentrations are much higher below it than above it. The study also indicated that salmon is not present on the Dalligan River.

While the salmon assay developed at UCD could potentially be used to monitor fish farm escapes, as well as identify new conservation areas, its primary purpose is to assist in a wider programme being co-ordinated by UCD called Reconnect. The aim is to produce evidence-based guidance to remove or modify river barriers, including adding fish passes where needed.

“To do that, we need to understand where the barriers are, what they’re like, how they impact on the fish, the movement of the water, and the habitat of the river,” says Mary Kelly-Quinn, who is the overall co-ordinator of the Reconnect programme, which is funded by the EPA. “Allowing salmon to get to their spawning territories is what it is all about.”

For Inland Fisheries Ireland, which is responsible for conserving and protecting our inland waterways, eDNA is a useful tool to complement other survey methods.

“When you survey an area and discover a barrier to migratory fish, you have to come up with a solution,” says Dr Cathal Gallagher, head of research at IFI. “After that you need to repeat the survey to see if the solution worked. The beauty of eDNA is that you can now do that with a water sample.”

Mapping river obstacles is an important component of the Reconnect programme, and the team is keen to involve the public, as the task is too big for any one organisation. Inland Fisheries Ireland has mapped 508 barriers in the Nore catchment alone. Only 11 of them were natural barriers. The rest were manmade.

“The plan is that we will eventually have a national inventory of barriers, and a method to assess them, figuring out what fish can and can’t pass through,” says Gallagher. “We can then develop protocols to open up our rivers.”

Fisherfolk and other “citizen scientists” interested in the future of salmon and other fish can help with the study, by contributing information via a dedicated website and an app called River Obstacles. Some rivers such as the Bandon and the Dodder are well mapped, but the Reconnect team are particularly anxious to get observations from the midlands and the northwest.

How to get involved