By 2050, antimicrobial resistance could cause even more deaths than cancer 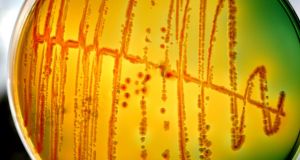 E.coli: the risks of antimicrobial resistance are further complicated by the lack of development of new antibiotics by pharmaceutical companies. Photograph: iStock/Getty

Antimicrobial resistance – the ability of bacteria, viruses, fungi or parasites to resist the effects of a medicine that could previously treat them – could cause more deaths than cancer by 2050, experts believe.

This stark prediction, made at the launch of the European Commission’s latest action plan to tackle antimicrobial resistance, follows that of former director general of the World Health Organisation (WHO) Margaret Chan who said “a post-antibiotic era, means, in effect, an end to modern medicines as we know it”.

Both are all the more shocking when you consider that scientists have known about anti-microbial resistance since the 1950s – just 10 years after antibiotics became widely used across the world. Antimicrobial resistance is now responsible for about 25,000 deaths annually in Europe and 700,000 people (of whom 200,000 are newborn babies) die from drug-resistant infections around the world every year.

We could end up in a situation that the products we have to treat life-threatening conditions such as meningitis, MRSA and other hospital infections will no longer work

“There is still not enough awareness of the risks associated with antimicrobial resistance. The challenge is that we could end up in a situation that the products we have to treat life-threatening conditions such as meningitis, MRSA and other hospital infections will no longer work,” says Emer Cooke, head of regulation of medicines and other health technologies at the WHO. Antimicrobial resistance also creates life-threatening infection risks for patients whose immune systems are compromised due to surgery, transplants or chemotherapy.

The WHO’s recent campaign to raise awareness among patients and health professionals classifies specific antibiotics into three categories: those that are safe to use regularly; those that should be used less often; and those that should only be used for serious, life-threatening conditions.

Every country is advised to develop a national antibiotic plan.

“You can’t control antimicrobial resistance unless antibiotic use is tackled in humans and animals,” says Cooke, who did her Masters Degree in drug resistance in the School of Pharmacy in Trinity College Dublin in the 1980s and was back in Dublin in September for the International Conference of Drug Regulatory Authorities.

The risks of antimicrobial resistance is further complicated by the lack of development of new antibiotics by pharmaceutical companies, specifically because their widespread usage is discouraged. Eighteen antibiotics were developed by big pharmaceutical firms in 1990 compared to six in 2016.

To combat this, new research partnerships such as the Global Antibiotic Research and Development Partnership and the CARB-X (Combating Antibiotic Resistant Bacteria) are funding early stage research into new antibiotics, vaccines and diagnostics.

Kathryn Holt is an Australian biologist who specialises in infectious disease genomics at the University of Melbourne and the London School of Hygiene and Tropical Medicine. Her interest in the global health crisis of antimicrobial resistance has led to the use of new tools for the tracking and surveillance of multidrug resistant pathogens.

“Infectious diseases are always changing and their spread is influenced by ecological, environmental, behavioural, social and political factors as well as how well equipped a country is to withstand them. We now know that pathogenic [disease-causing] bacteria carry drug resistant genes that are incredibly adaptive,” explains Holt, who was one of the speakers at the Schrodinger at 75, The Future of Biology lectures in Dublin in September.

Understanding how drug resistant genes are transmitted between different bacteria species, will, according to Holt, be a key to finding solutions to antimicrobial resistance. “Taking an evolutionary view of a vast population of different bacteria with different DNA can help us to get smarter with drugs and vaccines,” she says.

Holt says that the global sharing of pathogen gene data will also help speed up research into new treatments. “There will be a family of solutions to antimicrobial resistance. Using new antibiotics or using a combination of antibiotics together or alternately to prevent the evolution of resistance,” she explains.

Much effort is currently being put into finding ways to combat the resistance to the gut bacteria, E.coli and Klebsiella which are responsible for many hospital-acquired drug-resistant infections.

Holt refers to a study in the intensive care department of a Melbourne hospital which identified which patients had strains of E.coli and Klebsiella on admission to hospital. “We used genome sequencing to identify these patients and then found that almost everyone who developed these infections already had the bacteria in their gut when they came in. With this information, we can know what drugs are resistant to these bacteria and start to treat these patients more quickly,” she says.

The European Commission’s One Health strategy maps out a comprehensive approach to careful antimicrobial use in humans and animals. Its aim is to promote much more careful use of antibiotics by healthcare professionals while also monitoring and reporting on antimicrobial resistance in animals, food and humans. A ban on the use of antibiotics as growth promoters in feed for food-producing livestock is one important step. Antimicrobial-related provisions are also part of any free trade agreements with EU countries.

In Ireland, the National Action Plan on Antimicrobial Resistance published in September 2017 is the most recent effort to deal with the problem on a national level. Jointly developed by the Departments of Health and Agriculture, the plan aims to improve understanding of antimicrobial resistance, reduce the incidence of infection (through effective hygiene standards in healthcare settings), monitor outbreaks of drug-resistant infections and promote the careful use of antimicrobial medicines (antibiotics, antivirals and antifungal drugs).

One big stumbling block to effectively dealing with antimicrobial resistance in Ireland is the high use of antibiotics here. One study found that Irish patients are prescribed twice as many as Scottish patients and five times more than those in Sweden. We must ask whether doctors should be obliged to test infections before prescribing antibiotics?

And, it seems the standard medical advice to finish a course of antibiotics is no longer prudent. According to a report in the British Medical Journal, Prof Martin Llewelyn of the Brighton and Sussex Medical School and colleagues point to evidence that in many situations stopping antibiotics sooner is a safe and effective way to reduce antibiotic overuse. Although there are notable exceptions such as those used to treat tuberculosis.

Ultimately, curbing the overuse of antibiotics remains central to tackling antimicrobial infections. And the stubborn fact that two in three Europeans are still unaware that antibiotics are ineffective against viruses remains the hardest nut to crack.