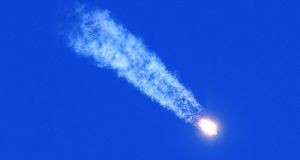 Russia’s ‘Soyuz’ spacecraft in flight before the mission was aborted on Wednesday. Photograph: Kirill Kudryavtsev/AFP/Getty Images

A Russian-American space crew survived a dramatic emergency landing in Kazakhstan after a rocket bound for the International Space Station failed shortly after lift-off on Thursday.

Rescuers found Alexei Orchinin, an astronaut working for Roscosmos, the Russian civilian space agency, and Nasa’s Nick Hague on a remote steppe some 450km northeast of the Baikonur cosmodrome in Kazakhstan, the starting point of their ill-fated mission.

The two men had parachuted to the ground after ejecting their capsule from the Russian-built Soyuz booster rocket that failed less than two minutes after launching on Thursday morning.

Nasa administrator Jim Bridenstine, who had joined Dmitry Rogozin, the general director of Roscosmos, to watch the launch at Baikonur, issued a statement saying that “an anomaly with the booster” had aborted the launch ascent. “Hague and Ovchinin are out of the capsule and are reported to be in good condition,” he added.

Mr Rogozin tweeted that rescuers had got to work “within seconds” of the accident. A government commission had been established to investigate what went wrong with the Soyuz rocket, he said.

In Moscow, Vladimir Putin’s spokesman Dmitry Peskov told reporters that the Russian president was receiving regular updates about the accident. “Thank God the cosmonauts are alive,” he said.

The accident marks a serious setback for Roscosmos, which is striving to regain the lead Russia enjoyed in international space industry during the Soviet era.

It could also have implications for the future of the ISS orbiting research laboratory, one of the few areas of Russian-US co-operation to have survived the steep decline in relations between the two countries over the past few years.

Yuri Borisov, Russian deputy prime minister with responsibility for the space programme, said Roscosmos was counting on the understanding of the US, and would not conceal the reasons for Thursday’s accident from Nasa. “This is a high technology sector linked with risks. It is not for nothing that our cosmonauts always receive the highest awards for flights. People risk their lives.”

Aerospace experts said the Russian Soyuz – the only spacecraft ferrying crews to the ISS since the US withdrew from the shuttle service in 2011 – would likely be grounded until the reasons for the launch failure were understood. US Boeing and Elon Musk’s SpaceX are both developing transport space ships, but these are unlikely to be ready for service for several years.

Relations between Roscosmos and Nasa have come under additional strain since US president Donald Trump proposed early this year to halt government funding for the ISS and instead turn the station over to the private sector.

Further problems surfaced after astronauts found a mysterious hole in the Soyuz spacecraft docked at the ISS in August. Roscosmos convened a commission to investigate the defect, but not before Mr Rogozin caused a furore by suggesting that the hole might have been drilled deliberately by malingerers either on Earth or in space.

Mr Bridenstine stressed that continuing collaboration with Roscosmos was important for Nasa after talks with Mr Rogozin early this week. The two men had discussed “the search for life, planetary defence, and a sustainable presence at the Moon”, he tweeted.