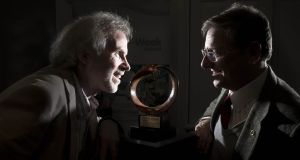 Irish mathematicians Prof Anthony O’Farrell and Dr Fiacre Ó Cairbre, both of Maynooth University, have been honoured as this year’s recipients of the Maths Week Ireland Award for their contribution to raising public awareness of maths.

The annual award is presented during Maths Week Ireland – the world’s largest festival of maths and numeracy, which continues until October 21st. The all-island event is co-ordinated by Calmast, Waterford Institute of Technology’s Stem Outreach Centre and funded through the Science Foundation Ireland Discover Programme, the Department of Education and Skills, Matrix (the Northern Ireland Science Industry Panel), ESB and Xilinx.

The recipients founded the annual Hamilton Walk in 1990 which celebrates the exact day (October 16th) and route taken by William Rowan Hamilton, one of the world’s most outstanding mathematicians who discovered quaternions in a flash of inspiration while walking along the banks of the Royal Canal in Dublin, carving his findings into the wall at Broome Bridge, Cabra. Hamilton’s discovery changed the future of mathematics.

Born in Dublin, Prof O’Farrell worked at the Irish Meteorological Service from 1964 to 1968. For most of that time he was a student of mathematical science at UCD and eventually resigned to devote himself to mathematics, continuing his studies in the US. In 1975 he was appointed professor of mathematics at Maynooth, where he spent the remainder of his career. He contributed widely to the mathematical profession in Ireland and was elected to the Royal Irish Academy in 1980.

Fiacre Ó Cairbe is a senior lecturer at the Department of Mathematics. After completing his degree and masters studies in mathematics at Maynooth, he completed a PhD at University of California Berkeley, and took a position as a visiting assistant professor at the University of California in 1988. In 1990, he returned to his alma mater and has worked there for the past 28 years.

Speaking at the awards ceremony, Eoin Gill, co-founder of Maths Week, said: “Anthony and Fiacre are worthy recipients of the 2018 Maths Week Ireland Award. They are both distinguished mathematicians but have also dedicated a lifetime of work to promoting awareness of the life and work of an Irish and international great, Sir William Rowan Hamilton.”