Fish, photos and fun – the everyday of maths

Access Science: Maths Week encourages us to become more comfortable with how we use maths in our day-to-day lives 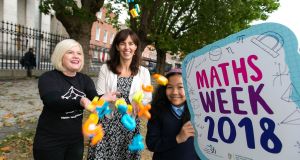 Maths is everywhere, and this year’s Maths Week (commencing on Saturday, October 13th) will encourage us all to become more comfortable with its everydayness, whether through counting fish in the aquarium, taking photos of the maths all around us or playing puzzles while out shopping.

“Maths is in everything, it is not just something we do in school, we use it every day in our lives,” says Dr Sheila Donegan, who co-founded Maths Week and is now overseeing its 13th year. “In everyday life, we use maths when we plan holidays, working out the timetables, and on a day-to-day basis we are constantly budgeting, seeing what the best value is.”

Donegan, who is a lecturer in chemistry at Waterford Institute of Technology and director of the Calmast STEM Outreach Centre, was inspired to set up Maths Week through a shared experience with her engineering colleague Eoin Gill.

The duo initially set up a pilot day in Waterford IT to encourage secondary-school students to have fun with the challenges of maths, and that soon had the support of Trinity College Dublin and Maynooth University.

It continued to snowball, and today Maths Week is an all-island event, notes Donegan. “It’s the largest festival of its kind in the world, and we have universities, institutes of technology, libraries and schools involved. We are in our 13th year of it now and around 300,000 people took part in it last year.”

One of the Maths Week regulars is a “maths in the city” initiative that encourages members of the public to play games and solve puzzles – this year the team will be around Grafton Street and in Stephen’s Green in Dublin on Saturday, October 13th and at Victoria Square Shopping Centre in Belfast on Saturday, October 20th.

“We see it’s a good way to get people thinking about maths,” explains Donegan. “People might not specifically choose to go to a maths event, but if they are out shopping or off to have some lunch they might just start playing with these puzzles and find themselves having fun with maths.”

Aquaria are getting in on the game too – the National Aquarium of Ireland at Galway Atlantaquaria will encourage young visitors to count out animals, measure tanks, monitor temperature and estimate animal sizes, and Dingle Oceanworld Aquarium will have maths trials for kids with questions, puzzles and equations.

As well as going to events and talks around the country, you can take part in Maths Week by putting on your “maths eyes” and taking pictures of maths in your surroundings, notes Donegan. You can find out more and check out previous competition winners at http://www.haveyougotmathseyes.com

Maths Week runs from October 13th to October 21st. For more details of events and competitions and to book places where needed, see: mathsweek.ie/2018/